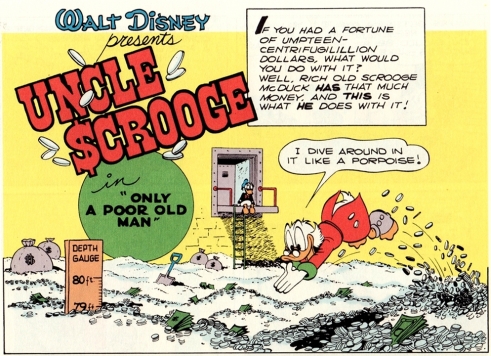 Scrooge McDuck sure does love his money!

Carl Barks, considered one of the innovators and legends of the comic book art form, is fondly remembered for his contributions to the world of Donald Duck. He began his long career in the Donald Duck animation unit for Walt Disney and contributed to thirty-six Donald animated shorts from 1936-1942. While there, Barks assisted in the creation of Donald’s nephews, Huey, Dewey, and Louie.  After feeling stifled creatively in the animation unit, he left Disney, only to return to his beloved ducks in the comic book world. He wrote and drew over six thousand pages over five hundred stories (including hundreds of covers) involving the Duck family for Western’s Dell and Gold Key comic book imprints.

Within the comic book medium, Barks created his most iconic character: Scrooge McDuck. In “Walt Disney’s Uncle Scrooge: Only a Poor Old Man (The Complete Carl Barks Disney Library Volume 12)”, some of Barks’s most brilliant and influential stories are collected in one gorgeous volume. Written and drawn by Barks, Fantagraphics Books has allowed colorist Rich Tommaso to lovingly bring to even more vibrant life the world of Duckburg (as well as such far-flung places as Atlantis) in these hilarious and nuanced stories of the miserly old Uncle Scrooge.

What makes Barks’s life story so rich is the fact that he was a self-taught man. He had almost no artistic training and learned to draw from imitating some of his favorite artists. As stated in the comprehensive and informative story notes included in this volume, Barks admired such early artists as Winsor McCay (creator of the astounding “Little Nemo” comic strip), “Popeye” artist Elzie Segar, and “Mickey Mouse” artist Floyd Gottfredson. With only an eighth grade education, Barks improved his writing skills by reading his old grammar books. Despite the tragedy, bad marriages, and other assorted events that colored his life, Barks was able to thrive because of his artistic gift. Like his creation Uncle Scrooge, Barks was a man who survived and became a success because of his perseverance and hard work.

The adult reader should not be fooled into thinking these stories based on talking ducks are not for them. With sophistication in writing, as well as art, Barks created a world with characters that had depth. There are lessons in these tales that children and adults alike need to learn (such as the value of hard work and the importance of loved ones), while at the same same time bringing two very important attributes that every reader, young and old alike, will appreciate: a sense of fun and wonder. 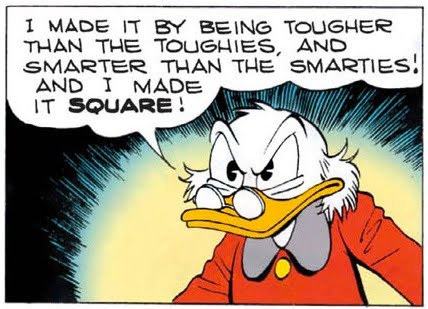 Uncle Scrooge is a survivor.

Although Scrooge is a duck with an unhealthy obsession with his monetary fortune, he has made those greenbacks and coins through hard work and hard living (not unlike the author and artist himself, as the notations in the back so eloquently state). In the story “Only a Poor Old Man”, Scrooge tells his nephews, Huey, Dewey, and Louie, how he made his fortune: “I made it by being tougher than the toughies, and smarter than the smarties! And I made it square!” With furrowed brow and hard demeanor, the reader knows this duck means business. Say what one will about Scrooge, he never, throughout these stories, squelches on his debts or promises. He’s a duck with a sense of honor and he expects others to live honorably as well (and, most importantly, pay back their debts to him).

Barks’s art has a timeless and almost otherworldly feel to it. His art is simple, yet rich in that simplicity. With little to no background art to distract the reader, emphasis is firmly placed on story and the humor within it. Little details stand out, bringing a smile to the reader’s face, such as Scrooge’s green curtains with dollar signs adorned upon them. Simplicity can be found in even the most complex of scenes. In “Back to the Klondike”, Scrooge reminisces about a fight at the Blackjack Ballroom. This scene is part of a flashback sequence that the comic book’s editors, according to the story notes, wanted deleted because of Scrooge’s “raucous and unchivalrous behavior.” With just a green wall as background and shadow emanating from Glittering Goldie as she ascends the stairs, a “raucous” fight occurs between Scrooge and the Blackjack’s patrons.

In this ballroom scene, Scrooge is clearly and hilariously, the winner of the fight. Because Scrooge is outnumbered and of diminutive size, Barks proves his mastery of comedic action. The only characters in color are Scrooge, Goldie, and the two individuals he knocks out with a barrel and a chair. The other characters are of a very pale blue hue, focusing the reader’s eye on the absurdity of Scrooge’s predicament and the mystery of why Goldie is rushing up the stairs. This is just one example of how the addition of Rich Tommaso’s coloring adds a richness to these stories decades later. Goldie must be given special mention as well. Sweat bounces off her forehead (as it does here and from other characters throughout Barks’s stories) and simple motion lines are depicted as she runs holding up her long dress. Emotions are important to Barks’s yarns and his ability to convey ones such as anger and frustration so simply is a storytelling gift.

Visual gags are aplenty in Barks’s oeuvre, with that visual humor being one of his strongest talents. In one particular one page short titled “Ballet Evasions”, Scrooge takes ballet lessons. He hasn’t, however, taken lessons for artistic purposes. He’s done it so he can evade a court summons, a charity group asking for a donation, and a collection agency. Naturally, they are all out to take a piece of his precious fortune. Watching him leap over those after him with eyes closed in satisfaction is pure fun. In this and the many one page stories peppered among his longer adventures throughout this volume, Barks’s mastery of the visual gag is displayed in all its glory. He makes it seem effortless. Another significant talent is exhibited throughout these one pagers: his ability to tell a rich story in such a compact space.

Carl Barks’s love for his Scrooge McDuck is evident in the writing and artistry of his duck tales. Whether making us laugh or inserting a morality tale within an adventure (as he does so beautifully in “The Menehune Mystery”), everything Barks puts on page is genuine and meticulously crafted. Scrooge always asks for help from his family in sticky situations and, though it may be in defense of his money, he truly cares for Donald, Huey, Dewey, and Louie. Scrooge’s creator, likewise, cares for the ducks he so lovingly portrays in his comics. Barks, like any great storyteller, compels his reader to feel what his characters are feeling and, in so doing, imbue a timelessness to those characters and his stories.