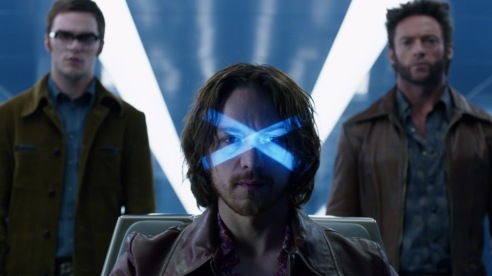 Charles Xavier (McAvoy) follows his destiny in “X-Men: Days of Future Past”.

“X-Men: Days of Future Past” enthusiastically embraces the spirit of the source material while finding a way to tie all of the previous X-Men films into its thoroughly fun time-travel story. But the reason the film succeeds is because of its honest-to-goodness sentiment and a desire to keep audiences entertained through easygoing humor and jaw dropping action-sequences.

The film is adapted from the two-part 1980 “Uncanny X-Men” storyline, “Days of Future Past”, written by Chris Claremont and drawn by John Byrne (the artist also assisted with the plotting). The film hits on the major beats of the original story, here with Wolverine’s subconscious traveling from the future to his younger self in 1973 New York City. In the future Earth has been virtually demolished by war between the mutants and the mutant-hunting Sentinels. Professor X and Magneto send Wolverine back to stop Mystique from assassinating Bolivar Trask, the man who invented the robots. Trask’s death snowballs into anti-mutant sentiment that causes near total annihilation of the human race.

Hugh Jackman returns for his seventh go as Wolverine, a role he has defined so completely that it is becoming difficult to believe another actor might one day fill the part. Jackman is at his best when he’s jumping from action to humor and back again; “Days of Future Past” allows for a fair share of this. Jackman shares fun barbs with Nicholas Hoult (as Hank McCoy) and Michael Fassbender (as Erik Lehnsherr). After an intense argument between Charles and Erik takes place on a plane, Logan says dryly, “So, you always were an asshole.” Jackman’s mix of being perpetually irate and charismatic has helped to make Wolverine such an enduring character on the big screen.

The film opens in a beleaguered future as the surviving X-Men, some new and some familiar to audiences, fight back multiple attacks by Sentinels. Singer creates immediate suspense as the heroes use their spectacular abilities to fight off the robotic killing machines. Seeing Iceman (played by Shawn Ashmore) sliding around on his ice-slides called out to my inner twelve-year-old. We also are introduced to new mutants to the X-Men franchise: Bishop (Omar Sy), Sunspot (Adan Canto), and Warpath (Booboo Stewart). It was a thrill to see more beloved characters joining the cast without feeling as though they have been arbitrarily added, which has been the problem with some of the lesser X-Men films. The highlight of this inventive opening set piece is seeing Blink (Bingbang Fan) teleporting the X-Men around their hideout at dizzying speeds.

Singer and team aim to dazzle with characters like Quicksilver (Peters) and Blink (Fan).

Once Wolverine’s mind is sent back to his younger self in 1973, he goes to seek out X-Men leader, Charles Xavier, (James McAvoy) and Hank McCoy at the Xavier School for Gifted Youngsters. The school and its founder have seen better days. McAvoy is constantly interesting as the emotionally fractured Charles, his stammering and propensity to fly off the handle are evidence that he has a long way to go before he achieves the reserved elegance of his future self (as played by Partick Stewart). Though Stewart may get less screen time as the future Xavier, his scenes are pivotal. This is especially so during a key scene where the Professor delivers a moving speech to his younger self that is every bit as inspiring as it is required to be.

Simon Kinberg’s script has the thoughtful finesse of Michael Dougherty, Dan Harris, and David Hayter’s script for “X2: X-Men United”, which has so far been the finest film in the X-Men series. Kinberg juggles so many characters in the giant comic book ensemble piece that it would seem some of them would have to get the short end of the stick by the end of the film. This is not the case. Kinberg gives Singer’s large cast plenty to do, in terms of action and, more importantly, in terms of character work. For example, McAvoy and Fassbender are astounding as they both go for the jugular, accusing each other for not doing enough for the mutant race. Their chemistry is electric and Kinberg has written exciting dialogue for them to deliver when they’re not using their immense powers to save the world.

Evan Peters steals all of his scenes as Peter Maximoff (it’s close enough comics fans). Peters imbues a flaky charm into his role as Quicksilver, whose power to run at incredible speeds might have only been demonstrated with the actor appearing around a room in the blink of an eye. Singer goes for something far more creative, and hilarious, as the speedster races through a kitchen to take out a group of police while time inches by slowly. The scene is flat-out magnificent as drops of water sit in midair and the force of Quicksilver’s unimaginable speed causes the skin on his face to flap while racing against the walls and between slow-motion bullets to the tune of Jim Croce’s 1973 classic, “Time in a Bottle”. When characters from comic books are adapted, you want to see their abilities presented as imaginatively as possible. This is exactly what we get with the Quicksilver sequences. 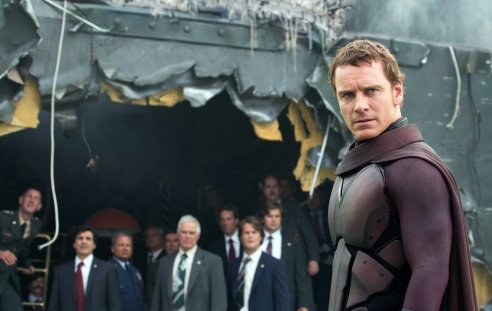 Magneto (Fassbender) is prepared to do anything to preserve the mutant race.

John Ottman returns to the franchise and the composer brings his penchant for intense sci-fi music as well as soft dramatic melodies. Ottman infuses some 1970s era funkiness into some of his score but he never hits us over the head by trying to remind audiences that this is a period piece. Similarly, other than the Croce’s tune and Roberta Flack’s “The First Time Ever I Saw Your Face”, the film doesn’t overwhelm the soundtrack with soft-hits of the Seventies.

There is no distinct antagonist in “Days of Future Past” and there doesn’t need to be. We know that all hell is going to break loose if Mystique is able to execute Bolivar Trask (Pete Dinklage) and that is enough to keep us categorically invested. As Trask, Dinklage plays the role of the inhumane scientist with a cold and self-assured style. We know the man is evil based on his past experiments on mutants, but we never truly see him in the act of evildoing. Dinklage forgoes snarling villainy for an even-keeled performance that is deep down more haunting. After a decade on the run, Mystique has grown into a militant leader, determined to take out any threat to her or her people. As Mystique, Jennifer Lawrence’s natural appeal makes it easy to care for her character regardless of her questionable tactics.

By the film’s conclusion, the situation grows more dire when Erik takes matters into his own hands and turns a terrible situation worse. In the future, the X-Men find themselves overwhelmed by an army of Sentinels, hopeful that they can hang on long enough for Wolverine to finish his mission. Like the best comic books, the very best, Singer and Kinberg put almost the entire cast in mortal peril before the film even considers coming to a close. This makes the film’s conclusion so completely satisfying, especially for longtime fans of this series.

The movie’s main fault? The continuity of the film doesn’t perfectly fit with some of the other films in the series. Considering the satisfying close that Singer and team bring to “Days of Future Past”, I recommend you put your timeline issues aside and enjoy just how satisfactorily the franchise is put back together by the film’s end.