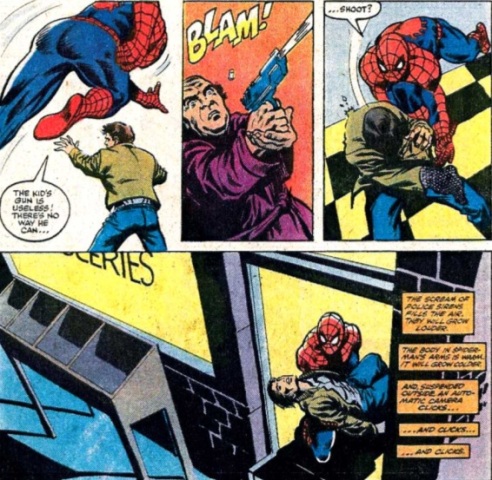 Spider-Man finds himself in the middle of a handgun tragedy.

When Bill Mantlo wrote “With This Gun… I Thee Kill!” for “Peter Parker, the Spectacular Spider-Man” #71 in 1982, its aim was neither to support the abolishment of guns nor hide behind the ever-growing blanket of the Second Amendment. This was a cautionary tale. There was a growing problem in America and Mantlo, Tom Defalco, and artist Rick Leonardi used the book to foster discussion.

The issue opens with Spider-Man following a couple of criminals breaking into a convenience store in New York’s Spanish Harlem. He startles the two young men and covers their firearms in webs to prevent them from shooting him. The store owner is awakened and finds Spider-Man attempting to subdue the crooks. “This is the fifth time I been hit this month!” the enraged man shouts as pulls out his own gun and shoots one of the men. A bullet blast right through the burglar who dies in the arms of Spider-Man as the hero’s automatic camera captures the horrific event.

Peter, planning to sell fresh Spidey photos to the Daily Bugle, set his camera up right before the criminals jimmied their way into the shop. The following morning, the photographer recounts his experience with his editor, Robbie Robertson, and fellow reporter, Lance Bannon. Peter is shaken from the experience and finds himself in the middle of a relatively calm discussion about the right to bear arms between Robbie and Lance. Robbie is pro-gun control while Lance believes in protecting individuals’ rights to defend themselves. Though the scene feels like it’s getting its cues from a Public Service Announcement, Robbie brings up some strong points about fatalities due to improper handgun use.

Spider-Man goes on a mission to break the illegal distribution of guns in the city. Simultaneously, Mantlo and Leonardi also explore what might take place on any given night when handgun tragedies occur. These haunting snapshots are the source of this issue’s remarkable strength and they are images that have stuck with me for over thirty years, when I originally read “Peter Parker” #71.

A college student returning home unannounced is shot dead by his father, blood drips down the face of man whose gun goes off while as he cleans it, and a couple is murdered in front of their horrified son (yes, a nod to the Dark Knight). The tragedies are born of accidents and crimes, yet the results are the same: death at the hands of guns. Each of these sequences are horrifying and, sadly, they all ring true. 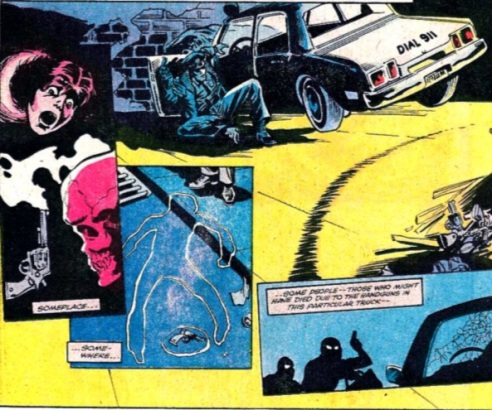 Spider-Man is able to prevent the distribution of some illegal handguns.

Bill Mantlo was keeping Spider-Man as grounded as possible in the 616 at the time, similar to what Roger Stern was putting the Wall Crawler through over on “The Amazing Spider-Man”. With “Peter Parker” #71, Mantlo removed as much of the fantastic as possible to face Spider-Man with a real world problem that had no reasonably simple solution.

After Robbie sounds off on the need for gun control, tosses out several distressing statistics, and explains the true intention of the Second Amendment, Lance ends the discussion with a plain fact:

Lance: But criminals will always find some way to get handguns!
Peter: What about that, Robbie?
Narrator: Robbie Robertson finds that he has no answer…

Spider-Man aids the police in preventing black-market guns from entering the city, but there are still casualties on both sides of a shootout at a Brooklyn dock. At the Daily Bugle the following day, Peter remains frustrated that an officer was gunned down during the melee. J. Jonah Jameson does little to comfort the beleaguered photographer:

J. Jonah: While the police—despite Spider-Man’s interference—were stopping one gun-smuggling operation in Brooklyn—12 more handgun shooting took play in New York City alone! And we have one of the toughest gun control laws in the country. What’s the answer? Can anyone tell me?

“Peter Parker” #71 isn’t as melodramatic as it might have been. In terms of the author’s viewpoint, Mantlo leans more left than right but he doesn’t attempt to solve the tricky problem of gun-related deaths. Mantlo and Leonardi present us with the problem, one that still exists three decades later, and leaves the reader to decide what action to take next.