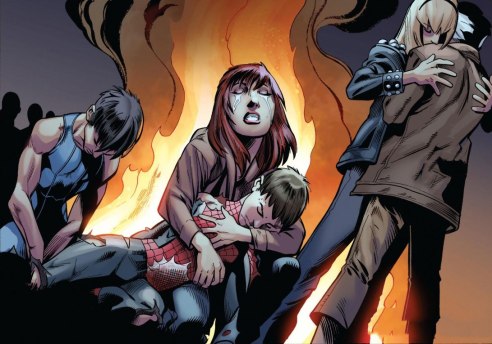 It was hard to stay composed when Spider-Man met his maker.

It was 1982 and I had just waited seventeen hours in line to see “E.T. the Extra Terrestrial”. Okay, well, it seemed like it was that long a wait. When you’re eleven, time feels as though it stretches on forever (unless it’s summer or you’re at Disneyland). So the film is nearing the finish line and E.T. appears to have eluded the authorities; his spaceship has just landed to take him back home (a place he had recently phoned). Suddenly, tearful goodbye after tearful goodbye takes place. Gertie starts the parade of waterworks, followed by Elliot, their mother and then Don.

Wait. That’s me. I cried during “E.T.”. It was the first time that I could remember crying during a movie. If it had happened previously it would have probably been due to loud noises or because I was hungry for breast milk. No, this film was the first to move me to tears. There would be many, many movies that would have the same effect on me over the years. And many opportunities to be teased by my twin brother with his damned emotionally impenetrable tear ducts.

Now at this time I was a voracious comic book reader, consuming just about any book that I could get my hands on. But comics never had the same emotional effect on me. No matter how hard the writers and artists tried to inspire tears to stream all over my beautiful DC and Marvel treasures, my eyes just weren’t going to take part in turning a Near Mint into a Very Fine.

Years later something eventually changed. Had I grown wiser over the decades? Was it that I had more life experiences under my belt? Could it be that the near destruction of the comic book industry as a result of over-speculation during the 90s had caused resale prices to nosedive? Perhaps it was combination of all of these things.  I don’t know but things have changed. What follows is a list of five books that have brought this comic enthusiast anywhere from choked up (with at least a single tear) to out and out blubbering.

It all started with the death of Peter Rasputin.

The Legacy Virus has taken a toll on mutantkind. The deadly disease is responsible for the deaths of many mutants, but none has hit closer to home for Peter Rasputin than the death of his younger sister, Illyana. Hank McCoy has finally developed a cure for the disease, but it comes with an awful price: a mutant must inject the deadly disease to allow the airborne cure to take effect. Peter knows what he must do. He sneaks into Hank’s laboratory and takes the needle containing the cure for the virus.

“Someday, there may be a cure that does not require a sacrifice,” says Peter. “Someday, the violence will end. Someday… children like Illyana will not be victims of a war they are not a part of. But I cannot stand by for even one hour knowing somewhere, someone else’s little sister is dying from this disease. Snowflake. I am coming home.”

As Peter’s body lies on the floor of Hank McCoy’s laboratory, with all of his friends standing over their friend, the caption boxes include an excerpt from the character’s first appearance in “Giant-Size X-Men” #1. In the scene, Peter is conflicted as to whether he should stay on his parents’ farm or go to America with Professor Charles Xavier. The words are instantly recognizable to fans of the series. Seeing them as Colossus has chosen to sacrifice his life makes the scene simply heartbreaking.

Human Torch’s return may have had more impact than his demise.

Okay, Johnny Storm’s death was absolutely sad, there’s no doubt about it. But I found one small panel in issue #601 of “Fantastic Four” to be one of the most emotional moments in comics. To set the stage, Ben Grimm is still grief-stricken over the loss of his little buddy. The Thing feels guilty that Johnny sacrificed his life in a battle with Annihilus, where Ben might have been able to take his friend’s place and survive an encounter that Johnny could not.

It’s a year later and Ben still feels lost without Johnny. The Earth is under attack by the Kree and the Thing is being beat to a pulp. The hero has all but given up on life. He let’s the aliens pounce on him as he just succumbs to the punishment he’s being given. Just then, a giant “4” made of flames appears in the sky above Manhattan. For fifty years this has been the symbol of the Fantastic Four, but it hasn’t been seen in the past twelve months. Its appearance lets New Yorkers know that they’re protected. It also let’s them know that the Human Torch has returned.

Then comes the panel. A close-up of Ben Grimm’s right ever-lovin’ blue eye, a stream of tears is falling across his cheek. “Ain’t that somethin’…” says Ben. 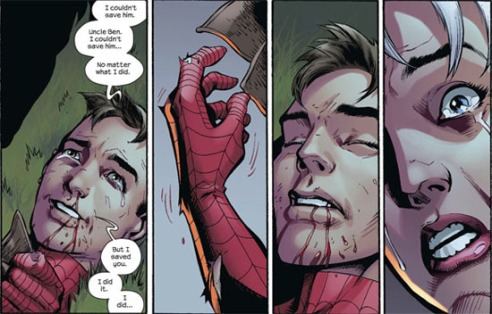 If you’re going to kill a character off, and you want it to be gut-wrenching, make sure it’s one of the most beloved characters in comics and he’s being held by the two people in his life who love him unconditionally. Writer Brian Michael Bendis and artist Mark Bagley brought this new version of Peter Parker to life in 2001 with the first issue of “Ultimate Spider-Man”, and a decade later they ended his story.

After a battle that would have Spider-Man face down his worst enemies, the young hero collapses, victorious and having saved his Aunt May. Peter’s journey had come full circle. Because of his arrogance he failed to stop the criminal who shot and murdered his Uncle Ben. On that terrible night the boy learned a valuable lesson about power and responsibility. He wasn’t going to let it happen again.

Alfred Pennyworth knew the job was dangerous when he took it.

After a year and a half absence, Batman has returned from the past to the present, just in time for a final showdown with Doctor Hurt and his army of flunkies. The Dark Knight is joined in battle by the Caped Crusader, his former protégé Dick Grayson, and the new Robin, his son Damian. Though Doctor Hurt flees the scene, we hear a transmission of the villain as he’s taunting Batman. He has taken a hostage: Alfred Pennyworth.

Alfred’s demonstration of bravery in the face of certain death was exceptionally moving. He isn’t sure at first if he’s actually communicating with Batman, but Alfred tells the hero to apprehend Doctor Hurt before Batman comes to the rescue of the man who raised him. Alfred is off screen during this entire sequence. All we know is that Doctor Hurt has him trapped and water is beginning to move its way up around his ankles. 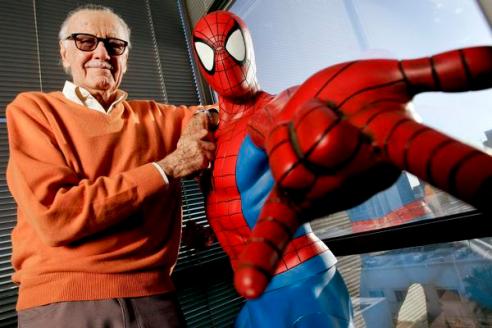 As many readers probably know, Peter Parker dies at the end of “The Amazing Spider-Man” #700. His longtime nemesis Doctor Octopus has gotten the upper hand and switched his mind with Peter’s. This leaves Peter in the deteriorating body of Otto Octavius, whose body finally gives up on him and causes Peter’s death. But that wasn’t what choked me up about this final issue of a comic that had recently celebrated its 50th Anniversary. “The Amazing Spider-Man” contained a final letter column with answers written by Stan Lee.

Here’s an excerpt of a letter from a Spidey fan named Juan Sam:

“Dear Stan, I can’t thank you enough, sir. I’m sure you’ve heard this a million times, but the characters you have created, especially Spider-Man, have helped make my life better.”

And they just go on and on, normal folks thanking Stan “The Man” for his important contribution to comics and, of course, to Spider-Man. Stan’s responses are gracious and filled with enough “Excelsior!”s to keep Marvel Zombies content for the rest of their lives. It was a classy, and surprisingly emotional, way to say goodbye to one of comics’ longest running books.

4 Responses to “Tear Jerkers: A Brief History of Comics that Made Me Cry”