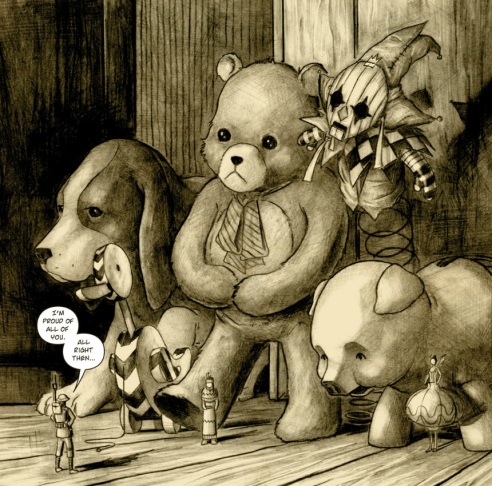 The brave toys of “The Stuff of Legend” ready themselves for their journey.

Not too deep into “The Stuff of Legend” I was transported back to the films of my childhood, specifically adaptations such as “The Secret of NIMH” and “The Last Unicorn”. While these were films that could be enjoyed by children, the worlds depicted in them had a darker edge that, as a kid, seemed more reminiscent of real life and less homogenized than the singing and dancing characters that inhabited the more popular Disney fare.

Like those stories, “The Stuff of Legend” isn’t a book for youngsters but it has a similar timeless appeal to many of the novels that are mainstays of children’s literature. As I continued making my way through this engrossing work by writers Mike Raicht and Brian Smith and artist Charles Paul Wilson III, I was struck by its imagination, the careful attention to every line of dialogue, and seemingly endless number of stunning illustrations. If your bookshelf includes Harry Potter novels, “Charlie and the Chocolate Factory”, “Charlotte’s Web”, or anything set in Narnia, “The Stuff of Legend” deserves a home among these beloved stories.

The book opens in 1944, Brooklyn, as a young boy and his dog sleep. Their peacefulness is interrupted by dark tentacles that slither out of the closet, tossing the dog aside and pulling the struggling boy into its realm. The child’s toys are left behind, silent observers of the crime and helpless to protect their owner from the grasp of the evil being known as the Boogeyman. Wilson’s work is reminiscent of classic storybook artwork, richly detailed and fantastic, but his storytelling ability is immediately apparent in the dramatic opening scene. Wilson moves the camera with expert precision from panel to panel as the shadowy creature seizes the boy. We see the struggle from vantage point of the toys, who are bound by mythical law not to move in front of humans.

Once the toys gather beside the scene of the crime, they debate whether or not to brave into the dark to save the boy from the lair of the Boogeyman. The Colonel, a toy soldier, requests volunteers to join him to bring the boy back. While some of the toys join the Colonel’s team, the others are fearful of such a journey. Raicht and Smith’s characters don’t say this plainly though. A stuffed bunny says “We’re just not built for battle.” Another toy says “Most of us belong to the younger boy now. We have responsibilities to him.” Moments before, the toys cheer on the Colonel for daring to enter the darkness to retrieve their master. When faced with the possibility of accompanying the soldier, their enthusiasm wanes.

Wilson captures the drama and horror perfectly as the toys can do nothing but watch as the boy is captured by the Boogeyman.

So begins the adventure, the small band of brave and not-so-brave toys make their way into the closet. When they come out the other side, they are either human-sized or the form of the animal that their toy selves represented. The rest of the toys are a random assortment: the Princess, a Native American warrior; the Jester, a former Jack-in-the-Box and admirer of the Princess; Max, a Teddy Bear and the boy’s favorite toy; Harmony, a spinning top and formidable soldier; Percy, a piggybank who is influenced too greatly by his fears; Quackers, a duck who is prone to outburst; and finally, Scout, the boy’s dog. Wilson’s designs for the characters are certainly inventive, but it is the soulful eyes he has granted Percy that I found especially striking.

Eventually the toys find themselves held longer than they might like in the town of Hopscotch, ruled over by a superficially whimsical man called the Mayor. There is little fun to be had for our heroes as this dictator forces the characters to play his games, leaving them on the losing end of his continuously changing rules. Though Hopscotch a home to childlike contests, Wilson certifies that this is a place of danger by frequently incorporating panels with free-standing cages, prison bars, or a hangman’s noose.

By the conclusion of the first Omnibus, which I suspect you will enjoy in a single sitting, a startling revelation is made and the characters find themselves divided and lost. Raicht, Smith, and Wilson have fashioned a world that is vast and inspired. The characters who reside within the darkness of the closet, whether they appear briefly or become a major part of the story, are things of pure imagination. Above all of them stands the Boogeyman, with his shadowy cloak of black flames and dark embers burning at his feet. His veiny skin fits tightly to his bony fingers and skull, his lips and eyes are as black as midnight, and he seduces the weak to do his bidding while striking out violently against those who choose to oppose him. Raicht, Smith, and Wilson have created a truly sinister baddie who is uncompromising in his villainy.

There is nothing flashy about Raicht and Smith’s dialogue, nor is it filled with clever one-liners or witty self-referential observations. It is graceful and smart. The characters speech is charming and the dialogue embodies the same timeless appeal of everything else within the pages of “The Stuff of Legend”.

The detail of Wilson’s work is magnificent. Take the opening chapter for example, when the Boogeyman kidnaps the boy. The room is lit by a single light beside the boy’s bed. As the camera continues to move from frame to frame, Wilson is always clear on where the source of the light is coming from, illuminating the characters and objects in a consistent manner. Similarly, there’s a scene with the Mayor at a candlelit table where Wilson makes certain that the characters appear to be lit from below by the faint light of the wick.

“The Stuff of Legend” is not colored, not in any standard form at least, but each page appears drawn on top of a muted yellow canvass. Below this, and often creeping into many of the panels, is what appears to be a beaten textured paper, rich with creases, splotches, speckles and life. Each page looks well worn and almost demands not to be owned digitally. Wilson adds significant depth to his artwork with beautiful pencil-etched shading.

“The Stuff of Legend” is a wonderful piece of literature that will remind you of the very best stories of your youth. After you’re finished, you may be inspired to keep the closet door shut before heading off to bed. Tightly.