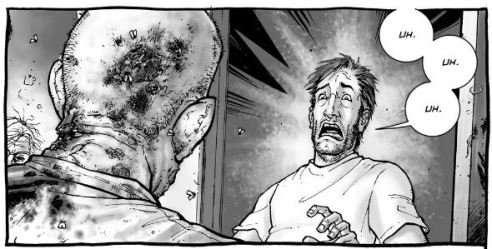 Hope lives on for many of the survivors who inhabit the world of “The Walking Dead: Days Gone By”. It may just be a few more weeks before the military swoops in to save them from the zombie apocalypse that has overrun this part of the country. Perhaps Jim, the quiet mechanic, will live after getting bitten by one of the creatures that attacked the survivors’s camp. Maybe, just maybe, waiting outside of Atlanta, where a swarm of zombies reside, will be safe as long as the survivors are on their toes and keep a vigilant watch of their surroundings. Yes, hope lives on in “Days Gone By”, but it is dwindling by the end of this opening chapter of the successful zombie series.

The story plays out similar to any film of the genre: the hero finds himself in the middle of an unexplained zombie outbreak, survivors start to group with one another, some of the survivors cease to survive, and the story concludes. But writer Robert Kirkman treats the material less like the first entry of a zombie film and instead asks “what happens next”? Where do the survivors go? What do they do to continue surviving? Do the petty complications that bothered them prior to the outbreak still bother them today? Straight away Kirkman dives right into how this event has affected the survivors, whether they have accepted this new world or they struggle to hold onto the hope that things will straighten themselves out.

Rick Grimes is a Kentucky police officer who gets shot during a traffic stop. When he awakens after a month in the hospital the world has already gone to hell and he is alone to discover it for himself. Rick doesn’t know what it is that he is going through, but Kirkman and artist Tony Moore have imagined an unbelievable nightmare world where corpses sleepily meander through a hospital commissary or bits of a human cyclist stare up at the sky, waiting for nothing but a human to make the mistake of walking near her mouth. Rick continues travel across the state, meeting a man and his son along the way, as he continues his search for his missing wife Laurie and son Carl. 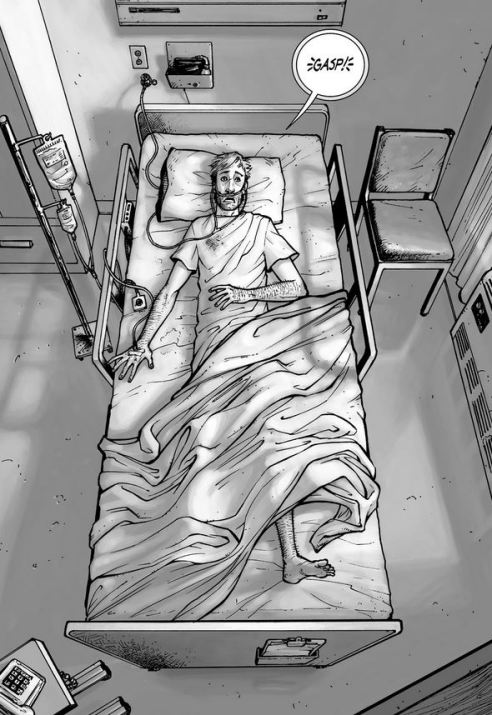 Rick Grimes is going to regret getting out of bed.

The family is reunited a third of the way through the book after Rick is saved by Glenn, who brings the cop back to a camp inhabited by a small band of survivors just outside Atlanta. It is here where the story begins to explore what a post-zombie world means to the small group who make up the cast of “Days Gone By.” Sisters Andrea and Amy keep elderly Dale company; their companionship helps him to get through the loss of his wife. Mother Hen Donna concentrates her judgmental glare at each and every member of the camp, holding strong to her wholesome Christian values. Laurie has no interest in her seven year-old son Carl learning how to protect himself with a firearm. Rick’s former partner Shane is dead set on maintaining camp on the outskirts of Atlanta, certain that the government is set to save them any time now.

The story’s major conflict resides between Rick and Shane. Rick believes setting up camp outside of town is unsafe while Shane believes staying put is their only hope for rescue. From here we get a few more zombie encounters, but the story centers squarely on the survivors and their new lives. It’s the human interactions that are key to distinguishing “The Walking Dead” from other zombie films and books. For example, Donna criticizes Laurie for being happy about the new detergent Glenn was able to nab during his last death-defying trip into town. Isn’t Laurie allowed to be happy about the smell of her clean clothes, or should she be upset, as Donna is, for being relegated to doing laundry?

There are a couple of things about Kirkman’s writing style that readers may not care about, which others might find ingratiating. The first is that the writer uses expository dialogue to bring readers up to speed and it can sometimes lack the subtleties of a more nuanced writer. In a single panel where Rick talks to Morgan, the first human he meets, Rick explains his accident and the search for his family, then Morgan informs Rick that the media is all down, then Morgan describes how to kill zombies. It’s scenes like this that make “Days Gone By” feel cluttered. A second issue is the use of dialogue over narration. It’s frustrating to read dialogue that would more appropriately occur as an internal thought than as a spoken one. Almost every time Rick is alone during the opening chapter of “Days Gone By”, it didn’t seem natural that he would be speaking during his walk through the abandoned hospital.

Moore, whose only work on the series interiors is on “Days Gone By”, is skilled at drawing horror. The artist’s docile zombies are thoroughly frightening with their missing limbs and the flesh that struggles to cling to their bodies. Moore’s details are astounding: their fingers are positioned in various directions, their heads lean carelessly to the side, and flies adhere to their skin. But the artist can do more than draw amazing decapitations (though those are pretty damn cool), his character work is astounding. When Rick comes across the body of the dead cyclist and a single devastated tear rolls down his cheek, you know immediately that Rick’s world is coming apart. Kirkman’s script calls for heart as much as it does for chills and Moore proves that he is entirely ready to deliver.

Kirkman’s biggest mistake in “Days Gone By” is that Rick borders on being infallible. Even in these early days of “The Walking Dead”, everything about teaching his seven year-old son to shoot a gun in self-defense seems wrong, especially to Laurie. Later, Rick’s instincts are proven correct and Laurie immediately apologizes for being “so stupid.” Yes, in the end Rick was right to show Carl how to use a gun, but Laurie was not “stupid” for being upset about it. Rick is also the only person at the camp who thinks they are too close to Atlanta and are in danger of a zombie attack. Rick is proven right again when the camp is attacked and a few survivors are killed. “The Walking Dead” needs a hero, but it is more interesting, and believable given the circumstances, if Rick doesn’t have all the right answers.

Even though there are storytelling and characterization problems with “Days Gone By”, this book is an absorbing read and difficult to put down. Kirkman keeps the pace moving fast when the story warrants it, but never loses sight that it’s going to be the characters at the heart of his story that will keep readers coming back for more.