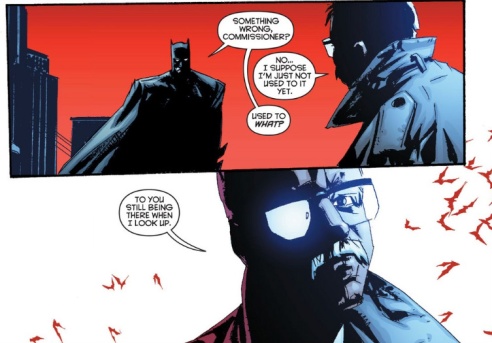 Commissioner Gordon gets accustomed to a new Batman in “The Black Mirror”.

“My father was right. Gotham is a hungry, wild and deadly place. When it wants something, you hand it over, or you beware.”
—Dick Grayson

Gotham is not for the timid or week or fragile as writer Scott Snyder sees it. We take stock of the fearsome city from a number of perspectives in the writer’s brilliant debut Dark Knight saga, “Batman: The Black Mirror”. Dick, Commissioner Gordon, and Detective Harvey Bullock all cement their conclusions regarding what it means to live, no, make that survive, in Gotham. The fabled city becomes a supporting character in Snyder’s eleven chapter story and we leave with the idea that it may inspire dark qualities within some of its citizenry, perhaps similar to the way that residing in Hollywood provokes many to grasp for the limelight.

While the Joker gets some time in “The Black Mirror”, the whole of the story is free of Batman’s rogues. As we make our way through Snyder’s epic, the writer and his magnificent artists, Jock and Francesco Francavilla, revisit past Batman stories in unexpected ways. Elements of “Batman, Inc.”, “Cataclysm”, “A Death in the Family”, “Batman: Year One”, and “The Killing Joke” are all revisited in “The Black Mirror”. Rather than only reference them as a means of paying homage to the Dark Knight’s rich history, Snyder expands on various corners of Gotham to illustrate what would have naturally followed. By setting the action of one of the book’s chapters in a hotel that was devastated during the “Cataclysm” storyline, and describing the horrors that occurred there, Snyder establishes a more three-dimensional world for his characters to inhabit.

Snyder’s attention, however, is not on taking readers on a nostalgic tour of Gotham City. The writer is more determined to getting to the heart of Dick Grayson, demonstrating that he has a clear understanding of the man under the cowl. At the time of the book’s publication, some writers struggled with finding Dick’s voice and ended up writing Bruce-sounding dialogue for the character. There’s a casualness to Dick that you wouldn’t have with Bruce (for example, he calls Alfred “Alfie”). More importantly, during the course of the story Dick continues to relate his life back to his childhood in the circus.

“The Black Mirror” is a series of interrelated short arcs, with the meat of story revolving around Commissioner Gordon and his son, Jarmes, Jr. The mystery at the heart of the book is whether or not James, Jr. is a young man attempting to survive as best he can with his mental disorder or a disturbed individual who has embraced his psychopathic impulses. In between, Batman and his alter ego work with Gordon on a few cases that bring the hero face-to-face with a pair of troublesome new villains: the Dealer and the Tiger Shark. Snyder starts off Gordon and Dick’s relationship icily with the following brief bit of dialogue:

Jock creates one indelible Batman image after another.

There is eloquence to Snyder’s script and every word feels carefully placed. In the opening pages of the first chapter, Dick describes how his father would attach different colored pins to a map to identify what type of show the Flying Graysons needed to put on in each city: “All the stops were marked red or blue, except for one—Gotham City, which was marked by a black pin. According to my father, the black pin meant no holds barred. Pull out all the stops. Bring down the house.” Snyder intermittently references the circus throughout “The Black Mirror”, but at the end of the first chapter he ties Dick’s narration back to the opening beautifully. A witness to the Dealer’s criminal activities has just been murdered and Batman vows to capture him: “And when I find him, I’m going to bring the whole house down on top of him.” Snyder’s skillful writing style is not characteristic of superhero comics, but it is by all means welcome.

Jock’s rough angular sketch style is a tonal fit for Snyder’s story, which moves between crime-drama to horror and back again. The first story arc features nightmarish images like a child with a couple of animalistic bites on his body, tangled vines piercing through a man’s mangled corpse, and tattered wallpaper with the handprints of the long dead victims of a banquet hall fire. Jock exposes every kernel of dread in Snyder’s chilling script and there’s much more to be had in the pages to follow. The artist is a proficient storyteller, always moving the camera in appealing ways, whether the scene is action oriented or not.

However, when he’s called upon to deliver the money shots, Jock produces one iconic image after the next. In one memorable splash page, Batman free falls straight down from Barbara Gordon’s base of operations while holding onto his cape from behind as it almost pierces the bat filled skyline of Gotham. The artist’s imperfect panel shapes and borders are consistently positioned in exciting ways, whether they are cascading over one another or placed beside each other at fluctuating angles.

Colorist David Baron, who colors over Jock’s pencils, works with plenty of mild green, blue, and yellow hues throughout the story. Baron’s work pops when the action gets going and he energizes the panels with deep reds and purples. One technique the colorist utilizes is to envelope the backgrounds in shocking colors, while leaving the characters and some of the environment in muted tones. 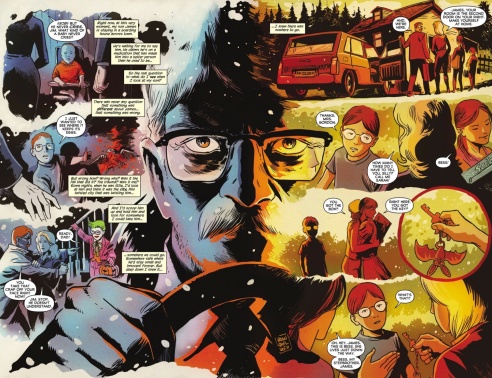 Francavilla illustrates one of the most memorable scenes from “The Black Mirror”.

About a third of the pages in “The Black Mirror” are illustrated by Francavilla, who tackles a series of stunning chapters which follow Commissioner Gordon and his son James, Jr. Francavilla’s looser line work is a significant contrast to Jock’s, but his noir style pairs well with Snyder’s script. Francavilla’s panels are eerie when necessary, such as when a young James, Jr. peers through a dark stairwell at his mother. But when Francavilla is given room to spread his wings, his pages are utterly brilliant. Using a montage of disturbing imagery, Snyder and Francavilla take us back through Commissioner Gordon’s memories of James, Jr.’s troubling childhood. Gordon’s face is in the center of the page, where it disappears into images of James, Jr. taking a bird apart to find “where it keeps its eggs”, then dressed as the Joker for Halloween, and finally into a sequence that has haunted Gordon for years.

Francavilla’s artwork is made even more harmonious by his spot on coloring of his own work. The artist typically only works with a few prominent colors on each page. During a chapter which finds Gordon following an old case, Francavilla utilizes grays, blues, and purples to convey winter in Gotham and a sumptuous Autumnal palette during a scene which takes place at Gordon’s summer home. But when Francavilla wants to switch to a more frenzied tone, and things get significantly more frenzied in “The Black Mirror”, the artist blankets his pages in reds, oranges, and purples. Together, Jock, Francavilla, and Baron have produced a book that contains glorious pages of timeless imagery.

Birds become a reoccurring motif in “The Black Mirror” thanks to a break in at a Gotham aviary. From the vultures perched outside of Dick’s window in the opening to the owl swooping out of the way of the Batwing in the close, Snyder and team have inserted an assortment of winged creatures, all in varying states of survival. In one scene a hawk swoops down to clutch a rat, probably to feed to her babies. Sadly, in the following chapter a rat is found gobbling up the hawk’s eggs before they had a chance to hatch on their own. Snyder seems to be saying that survival doesn’t come easy for anyone, or anything, in “a hungry, wild and deadly place” like Gotham. This is especially true for the former bird at the center of “The Black Mirror”. 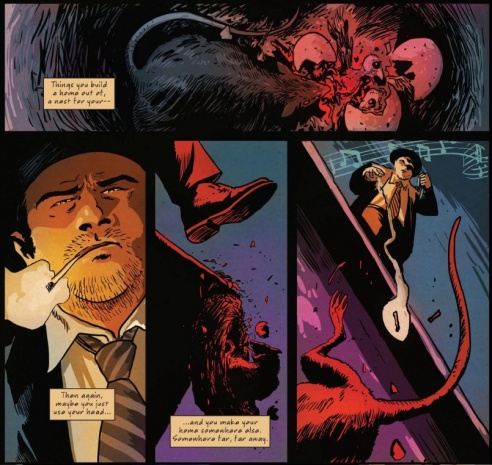 Life is not exactly a piece of cake in Gotham.

For as dark as Snyder goes during the story, he succeeds at finding bright spots in the scenes between Dick and the supporting cast assembled in “The Black Mirror”. For example, in a scene where Batman and Red Robin are conducting surveillance on a group of poachers, Snyder’s dry wit is nicely suited for Dick:

Red Robin: “No idea who they work for yet?”
Batman: “Nope. But be careful, Red Robin. They’re wearing sunglasses at night. Which means they’re very, very cool.”

Snyder and team’s first visit to Gotham is a stunning achievement. It riffs off of the best adventures of the Dark Knight, yet remains a story that stands very much on its own. And ultimately, “The Black Mirror” has found a deserved home alongside those same classic stories from which it was inspired.