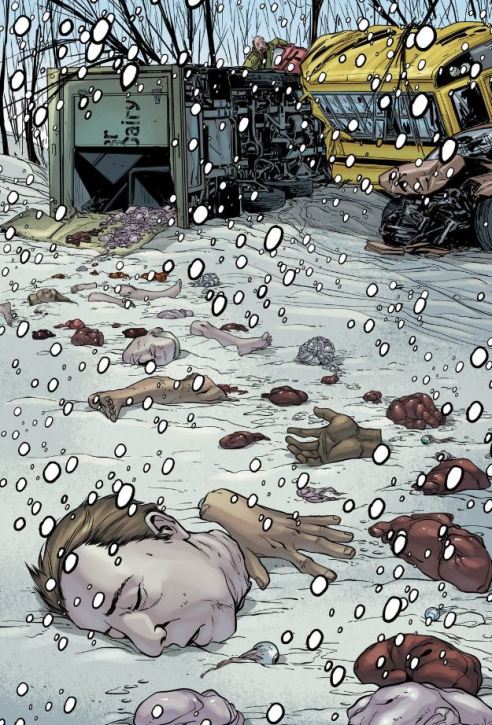 Although “The Walking Dead” may be getting all the attention as the go-to zombie comic, there is another title on the horror block that’s just as deserving of critical and commercial acclaim. That book is “Revival” and it isn’t your typical zombie fright fest. The “undead” don’t go around blindly terrorizing the living in the book’s very real setting of Wausau, Wisconsin. Instead, a select few are revived back to life after dying and are confused as to why they were chosen to resurrect over other dead people. What makes “Revival” even more powerful and one of the most frightening horror books out there is the fact that every character, reviver or not, have no inkling of what caused their city to become ground zero for a zombie epidemic.

Writer Tim Seeley and artist Mike Norton have populated a specific and very real part of the United States with characters that go through the same emotions and experiences that every reader can identify with. The cast includes a wide variety of people. There are such relatable characters as a struggling single mother, as well as reprehensible individuals such as a right-wing racist fanatic. By having such a diverse cast of characters, Seeley and Norton are able to conjure a realistic premise within a story that contains a basic fear and inevitability that humanity must contend with: the mystery of death. 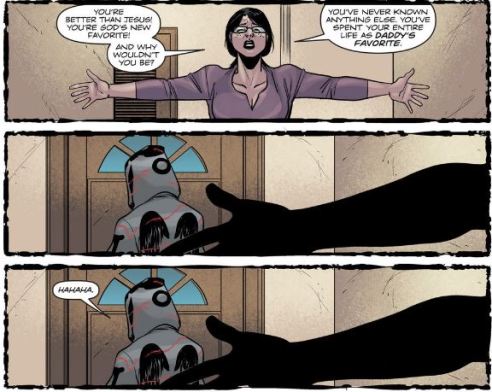 Sisters Dana and Em have a more-than-complicated relationship.

“Revival” has a large cast of characters, with each gloriously coming to life on the page because of Seeley’s expert storytelling skills. He beautifully weaves each character into the tale without confusing or overwhelming the reader. Despite a title that could easily seem cramped, Seeley and Norton craft a very personal book. The reader becomes invested from the very first chapter and is guaranteed to feel as if they have known these characters all their lives. Police Officer Dana Cypress is a single mother raising her inquisitive son Cooper. Dana’s sister Em is a college student who is involved with the mystery of the revivers. Every character has a personality, which is a very difficult feat to perform without letting a few characters become forgotten or underdeveloped.

Seeley is not only able to juggle characters, but their stories as well. He sets each scene by telling us the place and time in caption boxes. This little touch is reminiscent of a crime (or any other genre) procedural and never becomes jarring. Scenes segue one into the other and each issue is packed with chunks of story and characterization that weave back and forth from one to the other and back again. It’s a fast paced book, yet it never glosses over the important element of what compels a reader to care for the characters: empathy. From a Centers for Disease Control biologist to the reporter who broke the story of the revivers, each of the main players in “Revival” go through emotions and struggles that are familiar to every human being. There’s just one difference: humanity hasn’t (yet) had to see their loved ones come back from the dead.

Issues such as class, race, and religion are a vital ingredient in the individual stories that make up the whole of the book. The issues can be small and made in passing, like when Dana and the CDC biologist drive through the poor area of town that is populated by mostly Hmong people in order to get to the richer and whiter area of town. Ramin, the biologist, must deal with small town fears that include racism, Islamophobia, and fear of the unknown. Seeley is able to include social commentary in “Revival” without the book becoming sententious. These are real issues that plague society and because of that, the juxtaposition between a zombie story and the real world transform the book into one that is both entertaining and enlightening. The marriage of those two adjectives is one found in great horror tales.

The realism in Mike Norton’s art is just as prevalent and nuanced as it is in Seeley’s story. Physical traits for each of the characters are unique and appropriate for their personality. Although Dana and Em look like sisters (which Norton said he tried to convey and has succeeded in doing), their mannerisms are completely different at times. There is a hint of the dangerous and thirst for excitement in Em’s eyes in certain scenes. She is capable of doing things most people could not comprehend, yet the struggle between good and the not-so-good is clearly conveyed in her physicality. Dana, however, seems hotheaded at times, yet suppresses outbursts and even feels bad about things she has done to others. In one scene, she bites her lip and that small action displays Norton’s ability to draw empathy from the reader toward the characters through his art. Each character is given an individual personality which melds perfectly with Seeley’s words. 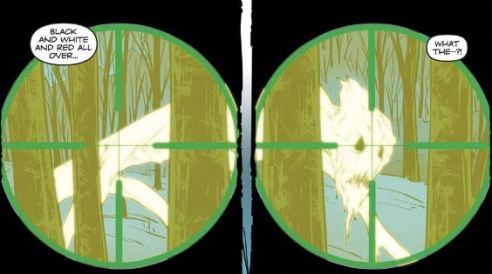 It’s a “creep” in the crosshairs!

Norton’s art combined with Mark Englert’s colors appears deceptively simple. One of the central tools Norton uses is his panel layouts. He doesn’t experiment much in the way the story is told and when he does it’s mainly in effectively creepy scenes with the mysterious “creeps” (as they’re dubbed by Seeley and Norton in the informative sketchbook section in the back of the book) or splash pages that reveal macabre goings-on. Even a snowmobile chase is dynamic in its simplicity. Norton’s art causes the reader to viscerally feel the physical and emotional turmoil that Seeley places before the characters.

That visceral feeling also comes through in Englert’s colors. Muted colors dominate “Revival” and are a perfect fit for the color palette of a realistic town. This isn’t a sci-fi epic or a tale full of fantastical creatures. The red Englert chooses appears thick like molasses and drips off the page. The roiling waters where the creepers creep is a complex swirl of blue that has a haunting quality. Most characters have a color associated with them and lends a consistent quality that is just another dollop of reality. The racist Edmund Holt always wears his orange hat and green shirt. Dana is usually in her blue police uniform and the closest the book comes to having a hero (and a conflicted one at that!). Norton and Englert, in these first eleven issues, instantly prove themselves one of the best artistic teams in comics.

In order to truly frighten a reader, a horror tale must contain the mundane and day-to-day living experiences of its characters. “Revival” does this flawlessly. Father and daughters struggle with family dynamics. A town’s racist redneck embodies the irrational fears and hate of ignorant members of society. A strange “disease” is infecting a small town and causing distress on top of those normal human issues that are so expertly dealt with in a book that comes alive through realistic writing and art. “Revival” may have some gore, but the real scares happen when characters that we care about must swim in the depths of something all humans fear most: the unknown.

“Revival” is in the vein of truly great horror stories because it is set in the real world. The reactions from each person in this book are realistic and understandable. What would happen if people could come back to life after dying? It would upend beliefs, values, and ways of life for every living person on this planet. Seeley and Norton comprehend the fallout from a “revival day” and incorporate real world issues such as class, race, and religion into their tapestry of a tale.

You can find this book at one of the following recommended retailers:
CheapGraphicNovels.com
comiXolgoy.com
InStockTrades.com