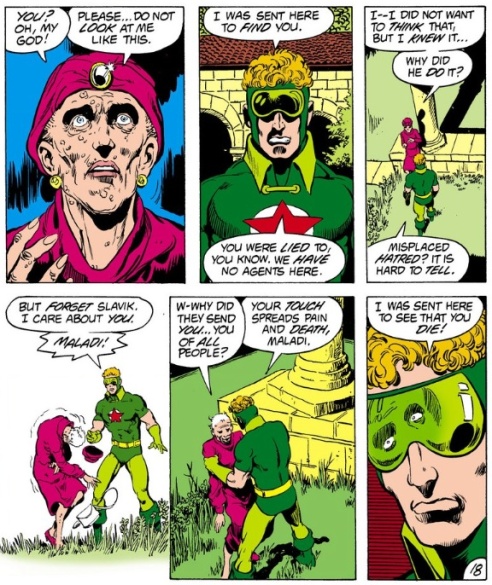 Wolfman and Pérez tell the tragic story of Leonid and Maladi in “The New Teen Titans” #18.

Marv Wolfman is as much a master at delivering emotional punches to the gut as he is at spinning exciting tales. One such punch was laid on the closing panels of “The New Teen Titans” #18, a memorable one-shot featuring the mysterious return of the communist superhero Starfire.

It was March of 1982 when “A Pretty Girl is Like a — Maladi!” was released. The new hit series by Wolfman and George Pérez was halfway through it’s sophomore year and the creators were churning out one terrific issue after the next. By this point, the creative team had introduced new heroes like Cyborg, Starfire, and Raven, as well as the villains Deathstroke, Trigon, and the Fearsome Five. Wolfman was determined to bring complexity to his characters by having them do more than face threats that would test their superhuman strength. The young heroes of “The New Teen Titans” would be confronted with ideological and moral challenges that were infinitely more complex than the ongoing battles between good and evil.

“A Pretty Girl is Like a — Maladi!” opens with a question from the omniscient narrator: “What do a comet plunging into the wastelands of Siberia, a violent revolution in El Salvador, and a young Russian bride-to-be all have in common?” Pérez presents three striking horizontal panels, the crashing comet, a violent El Salvadorian confrontation, and a beautiful young woman walking up to the Bureau of Scientific Records in her native Russia (I’m pretty certain that such a bureau never truly existed). The artist’s camera focuses closer to its subject with each succeeding panel until we reach Maladi Malanova, the character who will unknowingly be the catalyst of all the events that follow.

Marek Slavik has a grudge against Americans. His brother was killed in World War II as a result of an American soldier’s ineptitude, his wife died in a hotel explosion caused by an American bombing, and his son has just been killed by American soldiers in El Salvador. Slavik, who also works in the Bureau of Scientific Records, seeks his revenge with a plan to deliver a deadly virus to America using Maladi as its unsuspecting host. Series inker Romeo Tanghal was at the top of his game in 1982 and the opening pages are a testament to his gorgeously detailed embellishing. The weathered crevasses on Slavik’s distressed face, the endless file cabinets in his office, and the crumbled ruins of Slavik’s bombed hotel are all carefully rendered by Tanghal.

Back in the States, King Faraday informs the Teen Titans that a former acquaintance of theirs, Leonid Kovak (aka Starfire), is on his way to America on a secret mission that may have something to do with a plague-carrier. Wolfman and Len Wein created Starfire in 1968’s “Teen Titans” #18 (I’ll assume that the completely obscure character’s appearance in issue #18 of the new title was done as a nod to the original, less beloved, series). Of course, Wolfman and Pérez recycled the hero’s name when they introduced Koriand’r of the planet Tamaran in the pages of “DC Comics Presents” #26 (October 1980). The original Starfire would go on to be known as Red Star in the stories that followed. 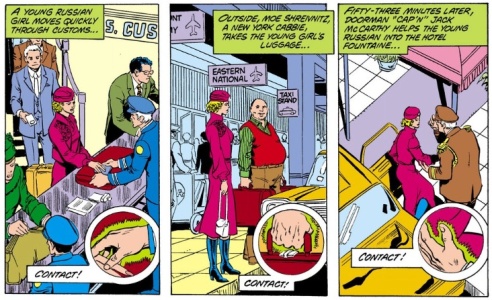 Maladi unknowingly infects anybody with whom she comes in contact with.

What did I know of conservatives and liberals back in 1982? Not much, if anything at all. I’m pretty certain this issue was my introduction to conservative values. To be fair, that is not to say this is an accurate depiction of right-wingers since I would assume that Wolfman was a liberal when he wrote the script for this issue. It was shocking to read the vitriol hurled at Starfire by Kid Flash simply because Starfire was from the Soviet Union. The boy who would eventually become the Flash shares his views, which are borderline racist, with his teammates at every turn of the story. Here are a few of Kid Flash’s xenophobic quotes:

“I never trusted him, Dick. You can’t trust any of his people. Look what they did in Afghanistan and Angola.”

“Don’t tell me you’ve forgotten your old fighting partners already? Or is your memory as poor as your country’s honor?”

“This time that commie’s not getting away!”

Sheesh! Sure, conservatives might have expressed similar views and hatred for the Russian government during the Cold War, but Kid Flash leans so far to the right in this issue that he would probably have difficulty securing a guest appearance on “Fox & Friends”. It was unexpected to have a hero, who was so willing to risk his life to save others, demonstrate such blind hatred for another person because that person hails from a country whose politics are questionable. Kid Flash lets his opinions of the Soviet Union completely distort his perception of Starfire.

This characterization of Wally as a narrow-minded youngster was a great touch by Wolfman. The heroes might all remain on the same side, but this added layer of friction afforded Wolfman and Pérez the ability to bring some authenticity between their young cast. When Wonder Girl questions Wally on his straight-shooting remarks, he replies, “Maybe because I knew our politics were always different. Look, I don’t put your down for being liberals. Why attack me for being a mid-Western conservative?”

Between all of this we have a race against time as Maladi continues to infect numerous New Yorkers with a deadly disease that is transmitted by touch. The Titans pursue Starfire as he himself searches for the young Russian woman across the Big Apple. Starfire finally admits that he was sent to America to put Maladi down before she can hurt anymore people, a fact that forces the Titans back into battle with their former ally. 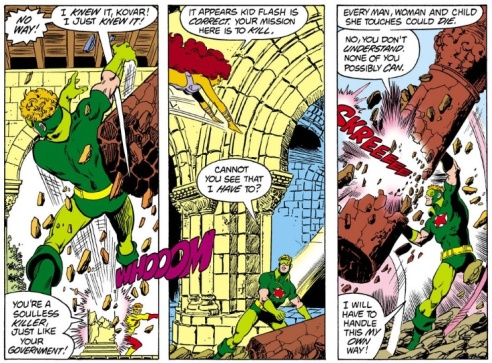 Pérez is a master of illustrating exciting action sequences.

One of the creepiest parts of the book is watching how easily the manmade plague spreads from one victim to the next. Wolfman and Pérez take Maladi across the city, from the airport, to her hotel, and to a doctor’s office. Pérez offers a close-up shot of each victim’s hand as it makes contact with Maladi; a green glow identifies that they have been infected with the deadly disease she carries. Particularly gruesome is the haunting effect Pérez uses to illustrate the viciousness of the plague. Green mold begins to cover the bodies of the victims as their bodies deteriorate. By the end of the issue Maladi is an unrecognizable fragment of the vibrant woman she was on the first page of the story.

Speaking of Maladi, let’s go over that guttural punch of ending. We know from page one that Maladi is engaged. On page eighteen, when Starfire finally finds the disease-stricken woman at the Cloisters in Fort Tryon Park, we learn that the man and woman know each other. “You?” says Maladi surprised. “Oh, my God! Please… do not look at me like this.” Okay, the attentive reader might have seen where this was going, but at 11 years old I did not give much thought to the exchange. Both Maladi and Starfire are government workers after all. I might have just assumed that the two of them were coworkers. But it is quickly apparent that Maladi and Leonid have a relationship that runs deeper.

A fight ensues between Starfire and the Titans, who are trying to prevent the Russian hero from putting Maladi down like a suffering animal. The team is able to overpower the enraged Starfire and Maladi is taken to the hospital where she is given medication to relieve her pain before she withers away and dies. The story closes with the final bit of tragic dialogue between Kid Flash and Starfire:

Starfire: “I would not expect you to understand but I volunteered for this mission to spare her the pains of a slow, tortuous death.”
Kid Flash: “Volunteered? Good God! What for Kovar? To get some blasted medals when you got home?”
Starfire: “No. I volunteered because I loved her. Maladi and I were engaged. And today… today was the day we were to be married.” 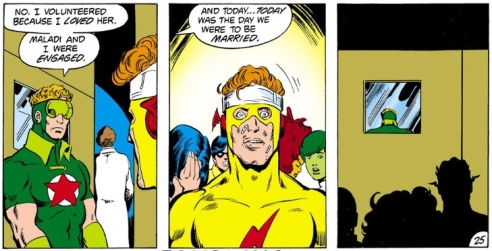 Kid Flash realizes too late that Starfire is no monster.

Pow. Of the thousands of comic books I’ve read in my life, this ending has always stuck with me. Kid Flash is left without another cruel attack to dish at Starfire. Instead, Pérez gives Wally West a mug that deserves a place in the dictionary under “dumbfounded”. Behind him Wonder Girl covers her face as she is left emotionally crushed by Starfire’s revelation. But Donna Troy is not as destroyed as Leonid, who leaves his formers teammates and the lifeless body of his fiancee. Pérez depicts Starfire’s isolation by illustrating the hero from behind with his head down. We can only see him through a small square window in the hospital door; the shadows of the Teen Titans appear against it.

As exceptional as Pérez’s artwork is in the issue, the celebrated artist was still honing his craft. Four years later, with “Crisis on Infinite Earths”, it is easy to see that the artist continued to push himself to deliver exceptional comic book pages. Not that this issue is subpar by any means. Pérez is a master of drawing exciting battle sequences and he delivers some excellent battles between Starfire and the Titans.

Unfortunately for me, Starfire wouldn’t return to the pages of “The New Teen Titans” for a number of years after this exceptional issue. Wolfman created an emotionally tortured hero by the end of the story and there seemed to be more that could have been done with him. Plus, the hero’s primarily green-toned uniform always appealed to me. It was a more form fitting version of the costume that artist Bill Draut drew in “Teen Titans” #18.

Wolfman and Pérez were just warming up in 1982 when they produced “A Pretty Girl is Like a — Maladi!” The writer/artist team would take their teenage crime fighters across the universe and to other dimensions to fight threats that were worthy of the Justice League of America. But it would always be the battles of conscience, those that took a more significant toll on our heroes, which left the greatest impact.