The joys of parenthood!

In the second volume of “Saga”, alien testicles, relationships (of both the familial and romantic sort), war, politics, the supernatural, and other deep (and sometimes hysterically prurient) elements continue to prove why this title is so beloved and declared by many to be one of the greatest comic books of the twenty-first century. Writer Brian K. Vaughn and artist Fiona Staples have created a world that’s fantastical in nature, yet extremely real. Sometimes humorous, sometimes heartbreaking, “Saga” addresses humanity through a fantasy lens and brings the characters that inhabit this book to glorious life. The reader cares about Alana, Marko, and their child Hazel (as well as the rest of the diverse cast) and their fate because their journey, thematically at least, is everyone’s journey.

At the core of “Saga” is the relationship between families. When Marko’s parents, Klara and Barr, unexpectedly arrive on Marko and Alana’s flying tree, the story becomes one of different generations dealing with the same feelings that any parent from any place or time will experience. Every parent’s relationship with their child goes through different stages as they and their children age. Both sets of parents, new and old, in “Saga” are protective of their children, yet struggle with how to interact with them. Klara believes Alana is not good enough for her son, while Alana worries about physically or emotionally damaging her newborn daughter. Vaughn explores the complexity of parenthood with characters who just happen to be designed with physical features such as horns, wings, or television heads.

Although Klara disapproves of Marko’s choice in a bride, Barr is open-minded and willing to develop a relationship with her. The scenes between Alana and Barr are some of the most emotionally complex in the book. When dealing with mortality, Vaughn never succumbs to maudlin moments. The bond between these in-laws develops naturally and highlights both of their personalities. Barr is a loving father who wants his son to be happy after he passes away. When Alana lowers her hostile defense mechanisms, she projects a maternal side toward her father-in-law. The reader gets to experience what made Marko love this strong and protective winged warrior.

Though serious issues are raised throughout “Saga”, Vaughn peppers the story with humorous dialogue. Caustic comments are sprinkled occasionally in the book. Klara boldly, and quite passive aggressively refers to Alana as Marko’s “little wartime concubine.” When a splash page involves Alana’s gun smashing violently into Marko’s face, Hazel’s narration describes her parents’ first meeting as a “meet-cute”. A grown Hazel, who is conveying the saga of “Saga” through her narration, playfully and conversationally writes her family history. Through her light interjections, Hazel adds levity to the intensity of the story’s themes. 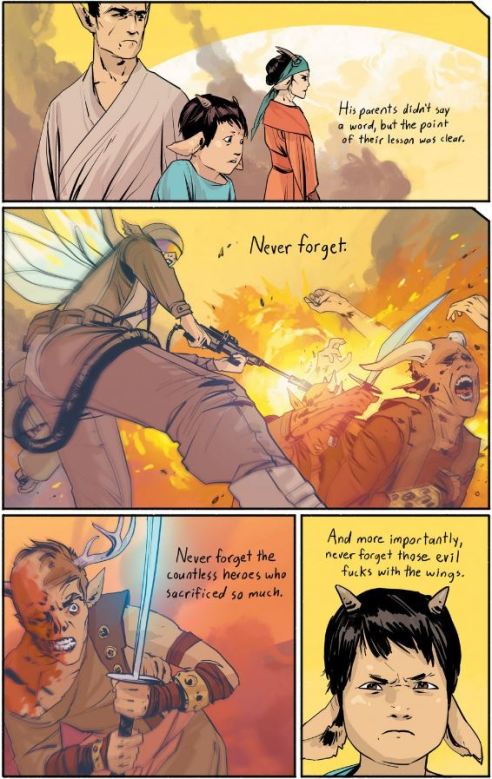 The love between these star-crossed lovers is blossoming during the backdrop of a years-long war between the planet Landfall and its moon, Wreath. War permeates all six issues collected in this volume. Vaughn writes the horror of war in ways both subtle and outrageous. This is stunningly executed by Staples’ artwork. A flashback between Marko and his parents occurs in the beginning of the book with a welcoming sunny sky . The scene opens with a splash page and an innocent Marko holding a dandelion as the seeds disperse into the wind. Staples expresses so much with such simple images. Marko is shown the horrors of war when his parents let him view a hologram of a massacre from the war’s beginning. His innocence is obliterated, with his face expressing the fear and disbelief at what war has wrought. As the battle is viewed with a bright yellow backdrop, Hazel narrates what her father is learning. In her usual humorous fashion, she says that her father learned to, “Never forget those evil fucks with the wings.” War breaks bonds between people and tears them apart, as expressed so powerfully and succinctly in Vaughn’s words and Staples’ art.

The proverbial “they” says the way to view someone’s soul is through their eyes. Staples works her magic by expressing through the eyes what each character thinks and feels in beautiful and sometimes heartbreaking ways. In a poignant flashback of blossoming love, Marko and Alana bond over their favorite book as she stands guard over her prisoner. Marko, throughout this series, has been shown to have a gentle soul. This scene gloriously encapsulates this innocent charm through the way Staples transforms Marko on the page into someone who feels very much alive. His eyes express intense interest one moment, contemplation the next, and then shock. In the panel before they have their first kiss, Marko’s eyes widen with fear and anticipation. He loves Alana and knows the heartbreak that love will cost them. When the kiss does happen, it’s so powerful because the love they feel for each other is so palpable and preordained to fail.

Not only is Staples an expert at emotionally resonant scenes, but she also creates some graphic images that leave a lasting impression (to say the least). At times beautiful or ugly, Staples’ images leave indelible marks (or scars) in readers’ minds that they will never forget (or want to forget).  Not only are there grotesque alien testicles as mentioned in the beginning of this review, but other sexual organs and acts are memorably depicted. When Marko and Alana have sex, the reactions during and after are beautifully drawn. There is nothing lewd about their love or love-making. However, the scenes depicted in Prince Robot IV’s television head are rather graphic when he’s wounded in battle. Vaughn and Staples aren’t trying to elicit cheap thrills from their readers (although certain censors will disagree), but to express the graphic and violent nature of war. Like porn, war dehumanizes and is devoid of love.

Staples’ use of color in “Saga” is very deliberate and unique and is an essential part of her storytelling kit. Colors fit themes and characters in sometimes inventive ways. When Prince Robot IV is wounded, he bleeds blue blood. Although it may not be obvious to some, the color blue (and the term “blue blood”) refers to nobility. A subtle, or not so subtle, use of color such as this contributes greatly to the power of a scene. Izabel the ghost glows an ethereal pink and appears to be projecting right off the page. The pink fits her teenage optimistic personality. Even the great expanse of space, despite its darkness, has bright swirling colors dwelling within its aura of possibility and beauty.

What truly stands out above all else in “Saga: Volume 2” is the power of hope and possibility. It’s the overarching theme of the series, which is expressed through the complex characters that pass through each issue. The “Romeo and Juliet” tinge to Marko’s and Alana’s relationship mirrors Shakespeare’s play and has a dash of possibility that love will triumph over the stupidity of mankind. Maybe the power of family and love can survive the man-made complications of war, politics, and the issues that divide humanity. Vaughn and Staples come together to birth a book that’s just as messy as Hazel’s birth that so memorably occurred back in issue one.

You can find this book at one of the following recommended retailers:
CheapGraphicNovels.com
comiXolgoy.com
InStockTrades.com