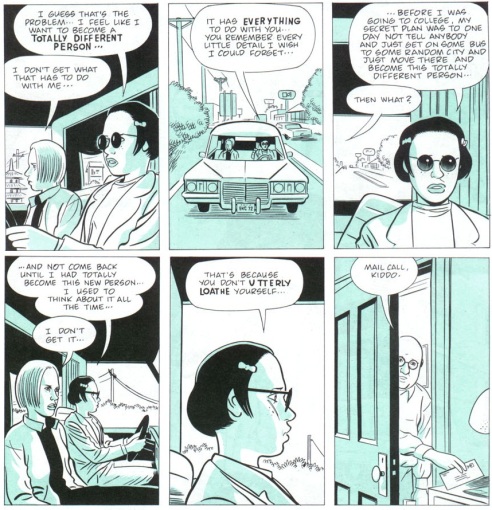 Welcome to Enid and Rebecca’s life.

Feelings of melancholy and insecurity are natural and obligatory emotions that every teenager experiences at one time or another before and after graduating high school. They must discover where their lives’ paths are going to take them as adulthood looms every closer upon the horizon. In Daniel Clowes’ hilarious and, at times, heartwrenching graphic novel “Ghost World”, two teenage girls blaze a path of sarcasm and biting language directed at themselves, each other, and the various people they interact with throughout the story. Humor is a way of coping with the intense and inevitable changes every young person must deal with and Clowes, who writes and supplies the art for the book, will leave the reader laughing out loud. After the laughter subsides, Clowes’ understanding of human nature shines through in subtle ways that brings the protagonists and best friends Enid Coleslaw and Rebecca Doppelganger superbly to life.

The dialogue between Enid and Rebecca is natural, with every reader guaranteed to have known someone like these two girls. The reader may even discover a bit of their past (or even current) selves in Clowes’ creations. Enid and Rebecca are observant girls, making assumptions about people they glimpse or interact with on a daily basis. Enid believes one couple are Satanists because of the way they dress and the umbrellas they use on sunny days. They viciously attack (in witty and glorious ways) people they know, like their past schoolmate Melorra who, behind her back, can’t believe she has become an actress. Yet they then insist on finding the commercial that Melorra says she’s featured in, possibly feeling a twinge of jealousy. They hilariously and derisively see people as beneath them, despite the self-loathing they direct toward themselves. Although their dialogue can seem mean-spirited, Enid and Rebecca are simply coping with life.

There is heart underneath the snark in “Ghost World”, with the relationship between Enid and Rebecca being the focus of the story. They love each other deeply as friends and are fighting the encroaching world of adulthood that surrounds them. Rebecca is afraid of losing her best friend to a college in another city, while Enid is unhappy in the rut she knows she will continue to remain within if she stays in her hometown. All that snarky language spewing from Enid’s mouth is her way of coping in a world where she sees herself as having no worth.

Despite her vitriolic words aimed at others, Enid still pines for her childhood. At the end of one particular day, Enid runs home to see if anyone had stolen a particular item from her garage sale: a doll from her fifth grade crush. Seeing that it’s there, she grabs it and screams, “Thank God!” She hugs it like a child as the moon shines down on her, clearly not ready to leave Rebecca or the world she knows so well. Enid’s nostalgia for childhood rears its head in another poignant scene when her father finds the records she would listen to as a child. After searching frantically earlier in the day for a particular single that was held dear to her heart, its finally found in the record pile. She listens to it as she holds the sleeve close to her chest, with her face and body language mirroring that of a child.  Both Enid and Rebecca are living in denial and finding it hard to convince themselves or each other that everything will turn out fine for them. They cling to the familiar, despite wanting to grow up.

Clowes’ artwork simply and vividly portrays the humor and heartache of the book, as shown in the aforementioned garage sale scene and Enid’s worship of childhood relics. The awkwardness, joy, and sadness of teenage life is found elsewhere in Clowes’ art. Enid reminisces about the guy who took away her virginity, Allen Weinstein. As she watches Allen smoke a joint, her eyes express anticipation and fear. While they’re having sex, a slight smile is evident on her face as she recalls “The Jeffersons” being on the television during coitus. Enid says she almost “cracked up a few times” during the act. After the act, everything became awkward between the two, with the post-coital scene between Enid and Allen clearly expressed in their faces.

Almost every conversation or experience shared between Enid and Rebecca is a laugh riot. The girls’ faces during the prank call scene are especially expressive. As Enid prank calls a man’s number from a personals ad, her face clearly is having trouble retaining composure. Laughs just want to burst out. Rebecca bites her fingers and strains to keep from laughing, her eyes closed in concentration. Despite losing their innocence throughout the book, both girls can still get their kicks by performing childish acts.

The book’s art wouldn’t be the same if it wasn’t in black, white, and aquamarine. It contributes to the desolation of the girls’ story and their lives, with the aquamarine adding an appropriately ghostly feel. With its watery aura, “Ghost World” and its inhabitants are simply wading through life. The absence of any color besides one as distinct as aquamarine contributes so much to the expressiveness of the art and highlights the simplicity and universality of Enid and Rebecca’s experiences. Whether its Enid’s outbursts or the quiet moments of desperation, Clowes lays everything bare for the reader to experience in a visceral and impactful way through his art. 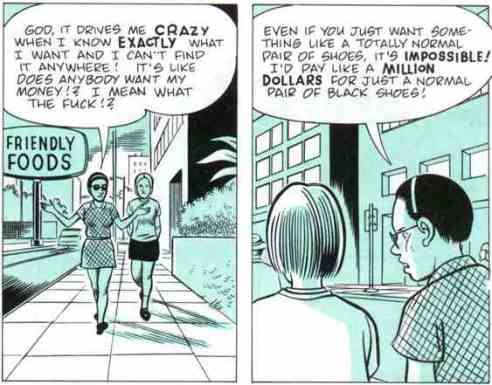 Does Enid really know what she wants out of life?

“Ghost World” is a book that conveys so much unsaid through the brilliant, laugh-out-loud, and genius dialogue. Pain, insecurity, jealousy, love, and, most of all, denial shared between Enid and Rebecca are just some of the intense and real emotions that pour forth from the humor and characters that Clowes writes and draws in this modern classic. Enid and Rebecca are genuine characters who pop off the page and, after the laughter subsides, remain in the back of the reader’s mind. Clowes’ “ghost world” is the world of teenagers and of the loneliness of finding oneself in a world where life is not always easy or definable. This “ghost world” is real life. As Enid so succinctly declares while on that search for her childhood record: “God, it drives me crazy when I know exactly what I want and I can’t find it anywhere!”