“High Crimes” opens with a horrific, yet curious, opening scene: a tour guide leans over a corpse in the Himalayan snow, begins to steal the dead man’s personal effects, and then starts slicing off his decaying hand. The next scene focuses on a woman who has clearly fallen from grace. Writer Christopher Sebela and artist Ibrahim Moustafa introduce the reader to these two characters and this mysterious world, and, through these first six issues of a planned twelve part series, create a story with excellent pacing, characters that come alive on the page, and a mystery that keeps the reader turning the pages with anticipation.

Zan Jensen, a former Olympic snowboarder and her mysterious partner Haskell Price run a business that leads sightseers up the peaks of the Himalayas. Behind the cover of a tour guide company, Zan and Haskell, as the book describes them, are “high-altitude grave robbers.” They saw the hand from deceased bodies for DNA evidence, find the dead’s relatives, and exchange bodies for money. One of the mystery men dug up from the Himalayas turns out to be a man who went AWOL years ago named Sullivan Mars who once belonged to a government agency whose members call themselves “Strange Agents”. When the agency comes after Haskell and Zan looking for Mars’ body, action and intrigue results.

The reader doesn’t know much about Haskell and Zan while the tale unfolds, but, as it progresses, their life story and motivations are fleshed out. Zan drowns her depression in alcohol and all manner of drugs, while Haskell holds onto regret relating to his family. Sebela, through the pacing of his story, allows the reader to empathize with the characters as well as add elements of noir, espionage, and horror. Any story that has a chase through the Himalayas, dismembered limbs, and a threatened torture “procedure” involving a rat and intestines most assuredly has something for almost every particular palate. “High Crimes” is a story with a high concept, yet is most assuredly not a one-trick yarn.

Sebela’s pacing adds to the story’s richness and demonstrates how each character is connected in some way. On the final page of the third issue, three characters’ connection is shown to further the story and the character development. Zan reads Mars’ diary as she travels by plane, with his words echoing how she feels as she heads toward the unknown. One panel has her on the plane reading while another has Mars, years before, writing the diary on a plane. Both are escaping to where they think their final destination lies: Mount Everest. Mars writes, “All roads ahead are blocked. There’s only one route left open. As high and as far away as I can go.” Two panels on the page even show the same man from the mysterious agency who is searching for both of them.

Moustafa is an artistic renaissance man. Not only does he pencil the book, but he supplies the inking and coloring as well. He brings Sebela’s story alive and, because the story is depicted in such a realistic manner through Moustafa’s art, that art can be taken for granted. From a scene where Price and Jensen are fingerprinting and bagging corpse hands to characters walking the streets of Kathmandu, Moustafa imbues his art with a beauty and realism that beckons the reader to delve headfirst into this story and these characters. Day-to-day interactions and actions, whether intimate or action-packed, are always crafted with care and detail. 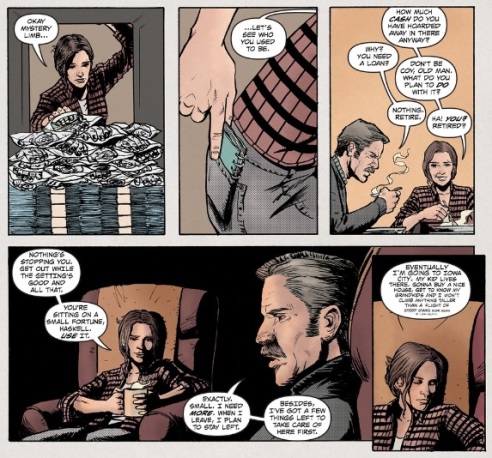 One of the hallmarks of a great artist is the quality of characters’ facial expressions. With a story that relies on sparse background information on the books’ characters, Moustafa coaxes out the motivations and feelings that they feel through these facial expressions and interactions with one another. One look can contain a suitcase of those feelings. One quiet scene between Haskell and Zan in the second part of the story is just one of Moustafa’s master classes in telling story through a face. When Haskell says he’s going to retire once they have completed their macabre business, Zan says, “Ha! You? Retired?” Zan’s face has a slight twitch on her left side, playfully jesting with him. The smile Moustafa creates on Zan’s face conveys a warmth toward her friend that is rarely shown in the book. So much is implied through the art to the reader in that smile and it humanizes her.

The following panel has both Haskell and Zan conversing and relaxing together. Zan’s face looks exhausted, yet conveying warmth and caring, once again, for her friend. The lines on Haskell’s face show a person who is also tired, as well as deep in thought. Here and throughout the series, Moustafa is co-creator with Sebela, bringing every character, no matter how minor, alive on the page. Getting lost in the story is easy to do when something feels as real as “High Crimes” does for the reader.

The colors supplied by Moustafa are as detailed and as well-thought out as his pencils and inks. In one scene, Sullivan Mars pushes a man out a window. They both land on top of a car, with Mars thankfully landing on top of the man. Mars runs off, with the faint dark hue of blood staining his suit. In a gorgeous two page segment from the fourth issue, one page has Mars overlooking a small town on a cliff. The colors are earthy brown and green, with the only hint of different colors being the buildings below. On the second page, Zan is on the same cliff during the very early morning when the moon is still shining. The atmosphere is more colorful, yet much more haunting. The richer greens and bright moon are pregnant with intrigue and danger. Moustafa’s coloring contributes to the complete package of a book that has been lovingly given attention.

The back matter in each issue adds much to “High Times”. Sebela regales the reader with the history of Mount Everest and the many people who have tried and failed to scale her treacherous terrain. Not only does it add to the historical understanding of the story’s real-life setting, but the facts also add to the metaphorical obstacles standing in the way of Zan, Haskell, and the long-deceased Sullivan Mars. The artistic process of character and cover creation, as well as additional goodies supplied by Moustafa, are nice to take a look at as well.

Christopher Sebela and Ibrahim Moustafa have created, through “High Crimes”, a story where nobody is innocent and where guilt weighs heavy on some of these characters’ souls. Nothing is black and white in this book, which is just one reason why Zan, Haskell, and Mars are such relatable and tragic figures. All they want is redemption and relief from what life has so unfairly placed upon their shoulders. Maybe by reaching Earth’s highest mountain, they will have conquered life itself. As Sullivan says in his diary: “The mountain, the man at the end of your knife: they’re your enemies. You can’t give in. Not to wonder nor sympathy nor fear.”

You can find this book on:
comiXology.com