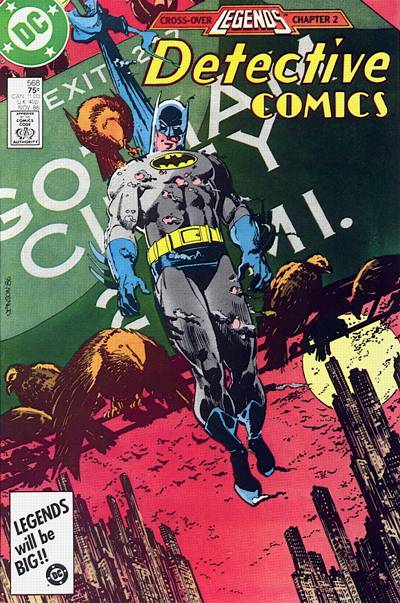 Like my previous entry in the Flashback Issue Bin, I read this story as a child in a collected volume. This time it was in “The Greatest Batman Stories Ever Told Volume 2”, which was released in 1992 to coincide with the “Batman Returns” film. The classic stories within featured the villains of the film: Catwoman and the Penguin. Although every story in the book was read and reread religiously (as were the ones in the previous volume), I want to focus on a particular story that caught my eye. I had always loved the artistry of Klaus Janson, whether he was inking, pencilling, or coloring favorite Bat-books that I cherished, such as “Batman: The Dark Knight Returns” or a particular issue of “Batman” or “Detective Comics” that I had gotten my hands on at a comic shop or convention. He was definitely in my Mount Rushmore of artists (and remains there to this day).

When I saw that “Detective Comics” #568 was the final issue in the book, which is a story featuring the Penguin, I was excited to read a comic featuring Janson’s art (pencils and colors) that had gone under my radar. Sadly, this volume of Bat-classics failed to have the covers of the issues within the book. It wasn’t until I was able to go on the internet a few years later that I was able to take in this issue’s hauntingly gorgeous cover. Falcons pecking at Batman’s body and a plethora of these giant birds overtaking a blood-red Gotham City skyline make for a truly eye-catching and scary piece of art.

The issue, titled “Eyrie” (which happens to be a nest belonging to a bird of prey that is built in a high and inaccessible location), was written by Joey Cavalieri as part of a tie-in to the “Legends” miniseries that was released in 1986 and 1987. However, the story can most assuredly be read and enjoyed on its own.

The first page could have been something lifted from an Alfred Hitchcock film (appropriate, since birds and the Penguin are involved). The words of the title, Eyrie, are ingeniously incorporated into the four panels of the page, with students running from a menacing bird. Point of view and angles are used by Janson in a unique way that unsettles in this scene and throughout the proceeding story. In the first panel, an ominous purple sky looms over two running college students. Something wicked surely comes for them. The second panel has an orange, red, and yellow sky blending to create a sense of dread, with the man running and the woman’s face at the bottom of the panel filled with fear. The third panel is completely covered with the black and purple of the fearsome fowl, except for the man on the ground looking up in horror. The fourth panel is simply blood-red and is effective at setting up the story. Cavalieri and Janson work in unison within this first page. The narration describes “the sound of beating wings! The drumming is accompanied by shrill cries–cried that seem to say , ‘Kill…kill…KILL!'” With that last “KILL!”, it stands stark within the single blood-red panel. The fear is definitely palpable.

The second page is a splash, with G. Gordon Godfrey, a rabble-rouser, inciting a crowd to hate the idea of the superhero. He endorses “the triumph of the common man!” Like the first page, Janson’s layouts are memorable and given great attention to detail. Batman and Robin loom small on a campus building, watching a crowd of protesters holding signs with the Bat-symbol and Superman symbol crossed out. It’s a powerful image, and made even more so with color choice. The orange and yellow setting sun is behind the Dynamic Duo, with the purple building, bright yellow and red signs and the blue tone of the crowd all coming together to create a scene that holds power and meaning on so many levels. Issues are raised, such as humanity’s reliance on these “superheroes” to protect them and the power of rhetoric and propaganda used to incite blind hatred.

Cavalieri writes some nice moments that define who Batman is and why he continues on his quest to be a hero. When Batman tells Robin to stay and care for the wounded student, Robin asks why he’s always left to take care of “the unimportant stuff.” Batman replies by saying that, “Ensuring that the victims of crime are taken care of always comes first. Keep in mind what’s really important.” Batman and Robin are not meant to simply have a “fun” time beating up criminals. I was taught by writers of comic books here and in other great stories that Batman’s mission goes much deeper than fisticuffs and fun. He’s a protector who uses his brain, as well as his brawn. The most “important” part of being a hero is using your mind to solve problems and helping your fellow man.

Speaking of “brains”, Cavalieri and Janson bring us a great scene of Batman using his detecting skills in the Batcave. Another powerful panel (as you can see, I can go on forever about Janson’s technique) is created for this scene. We spy Batman from behind sitting at a table and learning all he can about falcons. The dinosaur trophy in the cave looms over Batman and Robin, as Robin leans nonchalantly against a chair. Clearly, Robin is not taking his job as seriously as Batman. The contrast is clear, with Batman’s body language, even though he’s only seen from behind, conveying deep contemplation and study. And boy does that blue cape look astounding as it drapes down his back. With a yellow spotlight on the two and the blackness of the cave’s background, a scene that can appear simple can contain so much meaning. Janson’s art may appear to be “simple” to some because his art is uncluttered. He sticks to what’s important in the scene to give it its resonant power. His art is distinctive and unique, with a unique style all his own. It’s no wonder he’s written books on the art of inking and pencilling.

Klaus Janson, in this issue, proves himself to be not only a master inker, but a master penciller and colorist as well. Special mention should be made about the editor, Denny O’Neil. He will always have a special place in my heart as the Bat-editor of my youth. I wanted to be an editor and writer because of O’Neil’s influence. O”Neil, like Janson, is a renaissance man and expert at more than one thing: Janson with art (pencils, inks, and colors) and Denny with writing and editing. Together with Cavalieri, these three men came together (along with letterer extraordinaire John Costanza) to create “Detective Comics” #568, which remains one of my favorite comic book issues in my personal flashback issue bin. Cavalieri returns to Godfrey’s theme of the “triumph of the common man” with Bruce Wayne’s final words of the issue: “I think the ‘triumph of the common man’ is assured…whether or not there’s a Batman to help him.” Although it has been expressed in other comics and films, Bruce’s words here convey the notion that anyone can be a hero.

You can find this book at one of the following recommended retailers:
comiXology.com