This is not the future Scott Summers had in mind.

It’s a new world. The Avengers have recently taken down former X-Men leader Cyclops who, while possessed by the powerful entity known as the Phoenix Force, murdered his mentor and X-Men founder Professor Charles Xavier. In the wake of the battle, mutants have begun to reappear in vast numbers all over the planet. Yes, it’s a new world, but there are a lot of people out there who fear the new. The Red Skull is counting on it.

Writer Rick Remender returns mutants to their former status, where a world hates and fears them, but the mutant heroes won’t be hiding in the shadows anymore. They now have an ally in Captain America. Remender helps these characters take the next evolutionary step as Cap creates a Unity Division of the Avengers, comprised of X-Men and Avengers, aimed at demonstrating to the world that mutants and humans can coexist peacefully.

A clone recently revived clone of the Red Skull sees the vast return of mutants to the world as an opportunity for what else but world domination. First the villain, armed with powerful new telepathic abilities, manipulates the former X-Men enemy Avalanche to stage a deadly attack on humans in New York. His goal is to make an unforgettable statement and exponentially raise humans’ fear of mutants. Now that the Red Skull has instilled mistrust into the minds of the public, he makes another violent strike on the streets of New York, where he pits citizen against citizen in a violent stand against mutants.

The scale is big, the story is layered, the characters motivations are explored, and it mostly takes place in four chapters, but “Red Shadow” won’t leave readers feeling slighted. This book is the first volume of Remender’s ongoing “Uncanny Avengers” series, a book that plays off of Marvel’s past but is accessible to new readers. John Cassaday brings his unmistakably fine pencils to the four opening chapters, giving the series the epic quality that it deserves.

Between the return of the mutants, the Red Skull’s plot, and the formation of this new Unity Division of the Avengers, it’s surprising the extent that Remender is able to explore his characters and their motivations. The X-Men, especially Wolverine and Scarlet Witch, are left empty after the death of Xavier. Logan feels lost as the story opens, as though he has failed Charles. Wanda Maximoff is grief-stricken for the part she played in leading mutants down the destructive road that eventually caused Xavier’s demise. 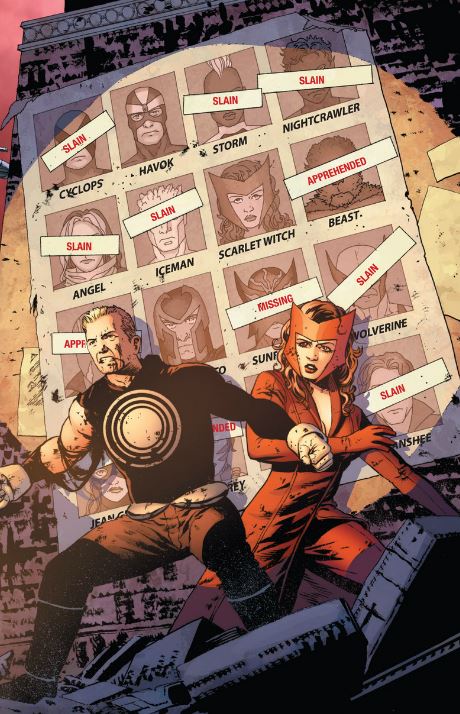 Red Skull’s vision of the future is one that is free of mutantkind.

With all of the suffering and bloodshed, Remender utilizes his strong sense of humor to impart some levity along the way. As when Captain America and Thor ask Alex Summers to join them for a cup of coffee, where they plan to request that he lead this new Avengers faction. Thor, looking as domineering as a Norse God ought to, says, “The place we go also makes lattes if you prefer. I do.” There’s also the following exchange between the Red Skull and his crony, Honest John, that demonstrates how truly vile the Nazi is:

Remender spends the most time with Alex, who as Havok has always been more of a fringe X-Man. Alex is thrust into the limelight by being chosen as the face of the new team. Remender balances the character by demonstrating confidence while in battle but insecurity when finding himself in face-to-face interactions, which are not natural for him. There’s a nice scene in the fifth chapter, drawn by Olivier Coipel, where Alex is about to speak to the press. Before he utters a word he flashes back to Scott screaming at him for never committing to Xavier’s dream. Remender is building Alex into a believable leader, but showing us his very human frailties to illustrate that the character has a road ahead of him that needs to be travelled.

John Cassaday’s soulful, haunting pencils are matched perfectly with both the dramatic and horrific elements of Remender’s story. The artist finds the pain in Logan’s eyes as he stares up at a painting of Charles Xavier and when he memorializes the mutant leader. Then there is the blood-dripping gore of the chilling opening and closing sequences of the first chapter of “Red Shadow”. Credit colorist Laura Martin’s primary use of red in this sequence to amplify the terror of the imagery. You’ll have a difficult time erasing them from your memory.

Fitted with new costumes, Cassaday interprets his heroes’ new duds just fine. Unfortunately, there’s something that just isn’t working with Havok’s new mask. Where there used to be impractical attachments that came off the mask, making his head look like an atom, now there are three stripes across his head that are pleading for more depth. I don’t believe the issue is with the artist because, in the fifth chapter, Coipel has the same problems with the headgear. Red Skull’s S-Men are another triumph for the artist. Half-man and half-monsters, these unique Remender villains look like they’ve walked right out of a nightmare.

Coipel draws a very attractive, in every sense of the word, last chapter that brings most of the team together with the addition Sunfire, Wonder Man and Wasp. It leads up to a very interesting, and very real, speech by Alex on his standpoint of the word “mutant”. Remender’s script is thoughtful in that he gives his characters a real world perspective.

Using an omniscient narrator is sometimes jarring, a storytelling technique that has been replaced by the normally more effective first-person narration. Remender builds an enormous battle sequence in the third and fourth chapters in which the Red Skull and his S-Men are taking on the Avengers while New Yorkers are slaughtering one another. The writer jumps from character to character in these mesmerizing two chapters, getting us into the heads of the heroes, the villains, and the human aggressors and victims. Remender is able to use the technique for humor, as when Wolverine is about to get the beating of his life, and horror, as a young victim is beaten mercilessly by mind-controlled cops, and everything in between.

Remender and team are off to an impressive start as they throw their characters directly into the heat of things in “Red Shadow” and offer glimpses that things won’t be getting an easier for the new team any time soon.