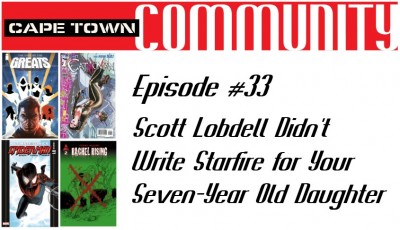 Has it really been three weeks since our last review show? Well, we’ve got a super-sized episode to keep you filled with Cape Town Communitainment until the first week of November (we’re actually doing a couple more “Very Special” episodes before then). Get ready for Don and Jerry to bring on the controversy this week—Whoopi and the View gals aren’t the only one who can discuss hot topics! We get into the recent spat over sex scenes in Red Hood and the Outlaws and Catwoman, Marvel charging $3.99 for books that we don’t feel ought to be priced so high, and Don’s decision to stop buying Marvel titles until they’re available on Comixology’s Android app (or something similar).

Cape Town Comic Discussion
00:16:11 Superman #1: An artist who writes? We couldn’t believe how well this book works!
00:22:13: Flash #1: And artist and colorist who write? Again—a home run for Francis Manapaul and Brian Buccellato.
00:025:49 Last of the Greats #1: Josh Fialkov and Brent Peeples have presented an inventive take on a world where humans and superhumans exist. This is an advance review—the book will be released on October 5th!
00:30:53 Ultimate Comics Spider-Man #1 and #2: Peter who? There is nothing but love for the direction that Brian Michael Bendis is taking this new Spider-Man title.
00:37:36 Bionic Man #2: What happened to the charm of the first issue? Steve Austin’s plane isn’t the only thing that took a nose dive.
00:41:39 Superboy #1: Scott Lobdell proves he is up for the relaunch with a new take on the Boy of Steel.
00:48:43 Supergirl #1: It’s official—four strong Super-books in one month. When is the last time that happened?
00:52:26 Red Hood and the Outlaws #1: Don’t let the controversy cloud your opinion—this is an enjoyable new book!
00:58:57 Batman #1: Scott Snyder is still in Gotham and he doesn’t miss a beat transitioning from Dick Grayson to Bruce Wayne.
01:03:57 Catwoman #1: We’re sorry sex between two consenting adults has gotten in the way of enjoying this new Judd Winick book.
01:08:43 Aquaman #1: Jerry and Don are totally enamored with Geoff Johns’ take on the King of the Sea.
01:14:45 Teen Titans #1: Lobdell is three-for-three.
01:19:06 I, Vampire #1: 2011 is looking to be the year of Fialkov with the introduction of another excellent new title.
01:23:42 Rachel Rising #2: Terry Moore still hasn’t sold us on this new horror series.
01:26:16 The Mighty Thor #6: Matt Fraction closes a solid and enjoyable first arc on this great new book.

Cape Town News Discussion
01:31:23 We continue the discussion every other comic book fan has been having: the sex scenes in Red Hood and the Outlaws and Catwoman.
01:42:45 We discuss the proliferation of 20-ish page books from Marvel with a $3.99 price tag.
01:50:50 Hugh Jackman defends rewrites to the Wolverine script.
01:53:14 Michael Shannon has been discussing much of the filming of The Man of Steel.
01:57:55 DC Universe has announced the cast of the Justice League Doom.
02:01:52 Patty Jenkins, the director of Monster, is being considered for the Thor sequel.
02:04:13 Nielsen has been hired to conduct market research on DC’s new line of books—but there have been a few snags.
02:13:31 Entertainment Weekly released some underwhelming Avengers head-shots.
02:19:32 Jerry isn’t crazy about Catwoman’s ears in The Dark Knight Rises.