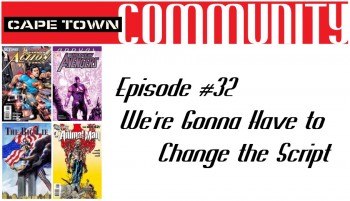 Well folks—this is it! This is our last weekly show, but we will be back on a monthly basis. Why bother you ask? Gosh, we hope you aren’t asking that! But we do love producing the show and we didn’t want to give that up. Jerry and Don have a lot to discuss outside of the weekly comic books—from Don going to digital only comic book reading to Jerry’s thoughts on next year’s superhero movie costumes. We hope you enjoy our extra-long final weekly episode and we really hope you come back for a listen next month!

Cape Town Comic Discussion
00:28:44 Action Comics #1: We loved Grant Morrison’s take on the Man of Steel.
00:38:49 Detective Comics #1: We were not as thrilled with Tony Daniel’s script as we were with his artwork.
00:47:44 StormWatch #1: While not all of the characters were familiar to us, we think Paul Cornell is off to a strong start with these former Wildstorm characters.
00:54:56 Animal Man #1: Jeff Lemire knocked it out of the park on this new series.
00:59:46 The New Avengers Annual #1: Brian Michael Bendis’ old school storytelling device has us pleased as punch.
01:05:45 Spider-Island: I Love New York City #1: The “Spider-Island” books continue to get better and better.
01:10:48 The Big Lie #1: We can both agree that this book sucks.
01:15:46 Batwing #1: Neither Don or Jerry were completely smitten with Judd Winick’s new book.
01:20:59 Swamp Thing #1: Scott Snyder is off to a solid start with the return of this classic character.
01:28:27 Batgirl #1: We finally disagree on the quality of one of DC’s new books.

Cape Town Ramblings, Part 2
01:43:24 Jerry and Don discuss the costumes we’ve been seeing from the sets of next year’s comic books films.
01:47:27 Don is excited that Jor-El and Wolverine will be appearing in a movie.
01:48:51 Don tells Jerry all about the Liberace episode of Batman.